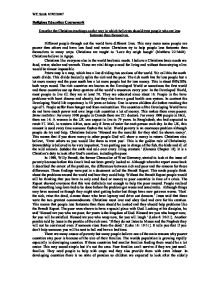 Different people through out the world have different lives. This may mean some people are poorer than others and have less food and water. Christians try to help people less fortunate than themselves in many ways. Christians are taught to

Religious Education Coursework Describe the Christian teachings on the way in which believers should treat people who are less fortunate than themselves. Different people through out the world have different lives. This may mean some people are poorer than others and have less food and water. Christians try to help people less fortunate than themselves in many ways. Christians are taught to 'Love thy neigh bough' (Matthew 22:36-40). Christians believe in Agape. Christians like everyone else in the world has basic needs. I believe a Christians basic needs are food, water, shelter and warmth. These are vital things u need for living and without them staying alive would be almost impossible. Peters map is a map, which has a line dividing two sections of the world. We call this the north south divide. This divide basically splits the rich and the poor. The rich north has far less people but a lot more money and the poor south has a lot more people but far less money. This is about 80%-20% both ways round. The rich countries are known as the Developed World or sometimes the first world and these countries use up three quarters of the world's resources every year. In the Developed World, most people to live till they are at least 70. They are educated since about 16. People in the have problems with heart disease and obesity, but they also have a good health care system. In contrast the Developing World life expectancy is 50 years or below. One in seven children die before reaching the age of 5. People suffer from hunger and from malnutrition. The countries of the Developing World have do not have much power and owe large rich countries a lot of money. This makes them even poorer. Some statistics: For every 1000 people in Canada there are 221 doctors. For every 1000 people in Haiti, there are 16. ...read more.

In the poorest countries, fewer than half of all adults can read and write. Education is not free so families can't afford to send the same child to school every year. They rotate who goes amongst the family. Child labour is a huge problem in the Developing world. In 2000 more than 250 million children between the ages of 5 and 14 were working in dangerous conditions. The UNICEF is one aid organisation, which tries to stop this. The poor really need to be taught basic skills to help them to read instructions on machinery or medicines and realise when they are being exploited. Overall there are a lot of things being done about the less fortunate although if we are going to complete solve the problem a lot more people will have to listen the Christian teachings and help. Religious Education Coursework Explain how Christians put these ideas into practise. There are many ways Christians help the less fortunate. Christians don't just send them money they give up a lot more time and effort than this. They might devote their lives to the less fortunate by working in a developing country as an aid worker, in a refugee camp or maybe a doctor or nurse. An example of someone devoting her life to the less fortunate is Mother Teresa. Mother Teresa was born on 27th August 1910. In her family there was not a lot of money but she shared her food with the poor. Her mother explained that the poor were 'Gods special people.' At 17 she became a nun because she was not interested in making money she wanted to devote her life to the poor. All through her life she helped the poor by things such as teaching and this work grew. Mother Teresa was awarded by the Indian Government and from the University of Cambridge. The work of Mother Teresa is very extreme although if Christians do not want to devote there whole lives to Charity they can work overseas for a short time. ...read more.

On the other hand many people believe helping other countries as much as possible is very important. They may believe this for a variety of reasons. They may feel guilty and looking back at the golden rule 'Treat other people as you would like them to treat you' this is saying you should treat everyone the same no matter where they live or who they are. It is a Christian duty to help the poor. Most Christians believe they would not go to heaven if they do not perform basic Christian duties. 'It is easier for a camel to go through the eye of a needle than a rich man to enter the kingdom of God' (mark chapter 16) tell us that you should not be greedy. This is why many people give a lot of money to the poor and believe it is right to not just let Charity start at home. Another reason for this side of the argument is that the problems in Africa and other LEDCs are far worse than our problems. They have millions of people starving and without shelter. My opinion on 'Does Charity Begin at home' has no simple answer. The problem of poverty in the poor is about the model of African leaders, the unfair international trade regulations and aid dependency. Countries like Africa will never develop if the people of that country do not help themselves politically and socially in the first place. I believe we should give a lot of money to LEDCs although we have to be totally sure where the moneys going and what its being used for. On the other hand I believe we do need to sort out our own problems because Britain is far from having no problems of itself. Overall I belie we should come to some kind of an agreement with the poor south to make sure money we give goes to good causes so that the charity we do give them is helping people who actually need help. ?? ?? ?? ?? Will Smith 07/05/2007 ...read more.