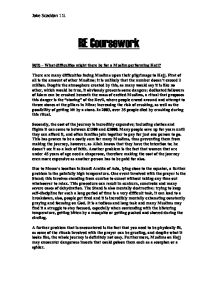 RE Coursework B(ii) - What difficulties might there be for a Muslim performing Hajj? There are many difficulties facing Muslims upon their pilgrimage to Hajj. First of all is the amount of other Muslims; it is unlikely that the number doesn't exceed 2 million. Despite the atmosphere created by this, as many would say it is like no other, which would be true, it obviously presents some dangers; dedicated followers of Islam can be crushed beneath the mass of excited Muslims, a ritual that proposes this danger is the "stoning" of the Devil, where people crowd around and attempt to throw stones at the pillars in Mina; increasing the risk of crushing, as well as the possibility of getting hit by a stone. ...read more.

Due to Mecca's location in Saudi Arabia of Asia, lying close to the equator, a further problem is the painfully high temperature. One event involved with the prayer is the Stand; this involves standing from sunrise to sunset without taking any time out whatsoever to relax. This procedure can result in sunburn, sunstroke and many severe cases of dehydration. The Stand is also mentally destructive; trying to keep self-discipline for such a long period of time is a very difficult task, it can lead to a breakdown, also, people get tired and it is incredibly mentally exhausting constantly praying and focusing on God. It is a tedious and long task and many Muslims may find it a struggle to stay focused, especially when contending with the blistering temperature, getting bitten by a mosquito or getting pushed and shoved during the circling. ...read more.

Furthermore, Aamer Chaudray, a journalist from Pakistan, took part in Hajj on behalf of his father who passed away, he found the commitment to the pilgrimage "too much", as his life was too busy to begin with, without the involvement of the problematic journey. My conclusion is simple; Hajj isn't meant to be easy. The physical difficulties and emotional commitments involved are all part of the pilgrimage, in order to show your loyalty to Allah. The difficulties endured are always rewarded, as there is no other journey in the world that would be more spiritually enlightening to a Muslim, therefore the commitment made is always worthwhile. Jake Scaddan 11L ...read more.