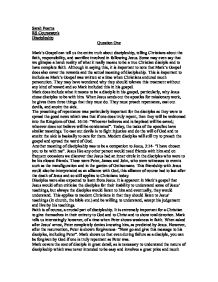 Sarah Fearns RS Coursework Discipleship Question One Mark's Gospel can tell us the entire truth about discipleship, telling Christians about the faith, responsibility, and sacrifice involved in following Jesus. Some may even say that we glimpse a harsh reality of what it really means to be a true Christian disciple and to have complete faith. Although in saying this, it is important to note that Mark's Gospel does also cover the rewards and the actual meaning of discipleship. This is important to include as Mark's Gospel was written at a time when Christians endured much persecution. They may have wondered why they should tolerate this treatment without any kind of reward and so Mark included this in his gospel. Mark does include what it means to be a disciple in his gospel, particularly, why Jesus chose disciples to be with him. When Jesus sends out the apostles for missionary work, he gives them three things that they must do. They must preach repentance, cast out devils, and anoint the sick. The preaching of repentance was particularly important for the disciples as they were to spread the good news which was that if one does truly repent, then they will be welcomed into the Kingdom of God. ...read more.

Mark tells us interestingly however, of a time when Peter shows weakness in faith. When asked after Jesus' arrest, Peter completely denies knowing him, as predicted by Jesus. However, after the resurrection, Peter is shown forgiveness- "Now go and give this message to his disciples, including Peter". Mark shows us that even during failure as a disciple, you can be forgiven by God if one is truly repentant as Peter was. Mark covers the cost of disciple in great detail, as is necessary to understand the nature of discipleship which was never intended to be easy and involves a great price and much responsibility. When Jesus sends out the disciples as apostles, they are told to take with them few possessions. Here, Mark shows us that discipleship was hard and that it was impossible to be materialistic. To carry out their duty to God, , disciples made a number of sacrifices, none of which were easy. This was to teach disciples that they should trust in God and not be weighed down by baggage. When Jesus first called the disciples, James and John immediately left their jobs and it is mentioned that they left their father. ...read more.

10:30-31- " 'I tell you the truth,' Jesus replied, 'no one who has left home or brothers or sisters or mother or father or children or fields for me and the gospel will fail to receive a hundred times as much in this present age (homes, brothers, sisters, mothers, children and fields--and with them, persecutions) and in the age to come, eternal life. But many who are first will be last, and the last first.' " Also, the rewards of discipleship can be felt in life, one's sacrifice as a disciple will be valued by God aswell as earning the fellowship of the Church. Generally, Marks Gospel teaches that discipleship is not a social status. It is not intended for a life of prestige and power but of humble service. Throughout the gospel, the disciples are shown to be imperfect, misunderstanding, and occasionally foolish. Discipleship is not shown in glory, and so the acceptance of it becomes an even more noble act aswell as reassuring modern day Christians that imperfection is forgivable and that even Peter, who denied Jesus, could go on to live the ideal life of a disciple, and now holds significant status in the Christian Church. ...read more.