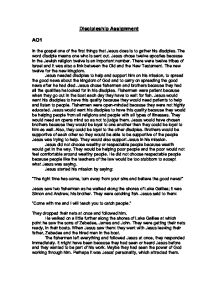 Discipleship Assignment AO1 In the gospel one of the first things that Jesus does is to gather his disciples. The word disciple means one who is sent out. Jesus chose twelve apostles because in the Jewish religion twelve is an important number. There were twelve tribes of Israel and it was also a link between the Old and the New Testament. The new twelve for the new kingdom. Jesus needed disciples to help and support him on his mission, to spread the good news about the kingdom of God and to carry on spreading the good news after he had died. Jesus chose fishermen and brothers because they had all the qualities he looked for in his disciples. Fishermen were patient because when they go out in the boat each day they have to wait for fish. Jesus would want his disciples to have this quality because they would need patients to help and listen to people. ...read more.

Jesus started his mission by saying: "The right time has come, turn away from your sins and believe the good news!" Jesus saw two fishermen as he walked along the shores of Lake Galilee; it was Simon and Andrew, his brother. They were catching fish. Jesus said to them: "Come with me and I will teach you to catch people." They dropped their nets at once and followed him. He walked on a little further along the shores of Lake Galilee at which point he saw the sons of Zebedee, James and John. They were getting their nets ready, in their boats. When Jesus saw them: they went with Jesus leaving their father, Zebedee and the hired men in the boat. The fishermen left everything and followed Jesus at once, they responded immediately. It might have been because they had seen or heard Jesus before and they wanted to be part of his work. ...read more.

This meant that money and wealth would not distract them from their mission. Also, poor people would feel more comfortable with them. No extra shirt because they only needed what was necessary. He told them not to stay if they were not welcome because if the person did not realize the message of the kingdom then they should leave immediately. He told them to take a stick and sandals with them to help them on the rocky ground, and for protection. Jesus gave his last set of instructions after his death and resurrection. Three of the instructions were the same as before to preach, drive out demons and heal the sick. The new instructions were to speak strange tongues, not to be harmed by snakes or poison and to perform miracles. He gave them these instructions because it was sign of authority, that they were blessed by God and Gods power was working through them. These instructions were demanding and show that their faith was being tested. ...read more.