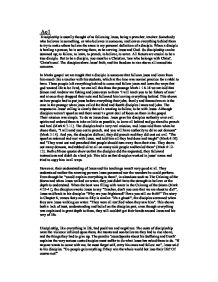 Ao1 Discipleship is usually thought of as following Jesus, being a preacher, teacher. Somebody who believes in something, or who believes in someone, and leaves everything behind them to try to make others believe the same is my personal definition of a disciple. When a disciple is healing a person, he is serving them, as he serving Jesus and God. So discipleship can be summed up; to follow, to learn, to preach, to believe, to serve. All factors are crucial to be a true disciple. But to be a disciple, you must be a Christian, 'one who belongs with Christ', 'Christ's one'. The disciples share Jesus' faith, and his freedom to rise above all immediate concerns. In Marks gospel we are taught that a disciple is someone that follows jesus and learn from him much like a teacher with his students, which at the time was normal practice for a rabbi to have. These people left everything behind to come and follow jesus and learn the ways that god wanted life to be lived, we can tell this from the passage Mark 1:16-18 we are told that Simon and Andrew are fishing and jesus says to them 'I will teach you to be fishers of men' and at once they dropped their nets and followed him leaving everything behind. ...read more.

Some of the stories in Mark's Gospel can be used to present day realities. For example, Bill Gates, the billionaire Microsoft founder, gives one million pounds every year to charity. As a family, we'll fill envelopes that come through the door asking for charity, as we will run a stall at a Leukaemia Research Fund Summer fayre. Then if you think of a homeless person giving the tiny amount they possess to charity, it is just totally different. Who is giving more? Is a million pounds more than an envelope full of coppers? No it's not. The poor person who has next to nothing and who is giving that small amount is giving the most. This modern day scenario can seen in Marks Gospel, it is like "The Widow's Offering", where many rich men give much to the temple treasury, and a poor old widow gives two copper coins. Similarities can also be seen in parables such as "The Rich Man", where a rich man has to leave his riches behind to follow Jesus and receive eternal life, and so he doesn't. Likewise, today, a millionaire is less likely to become a monk than a poor man would. Many thousands of people get together frequently to raise money for the poor, or to celebrate the achievements of the less privileged. ...read more.

Clearly this is a setback for those wanting to spend their lives on more traditional matters, but again, to be a true disciple is to rise above this, and make the effort to overcome the problems and setbacks to achieve goals. Others would say that fitting such a lifestyle into this secular world would be the answer, and perhaps it has to be in a way, but having all this modern technology shouldn't prevent, or even reduce the chances and time for prayer, communication, etc. Unfortunately however, because of all the way in which our world now runs, there are fewer genuine Christians, but the positive outlook we can make about this is that these Christians are strong, in their beliefs and in their morals. In conclusion, it is possible to be a true disciple in the modern day. It is nowhere near the same to what the first disciples were like, but the same principles are involved, love, faith, care, willingness, commitment. Understanding is vital too, and even though the disciples of Jesus didn't quite master this area, we today can, we can understand the bible, and what Jesus told us, we can go to church and communicate with God, priests, monks and nuns. To be a true disciple is to be true. ...read more.