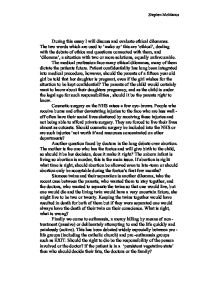 During this essay I will discuss and evaluate ethical dilemmas. The two words which are used to 'make up' this are 'ethical', dealing with the debate of ethics and questions connected with them, and 'dilemma', a situation with two or more solutions, equally unfavourable. The medical profession face many ethical dilemmas, many of them dictate the patients future. Patient confidentiality has long been integrated into medical procedure, however, should the parents of a fifteen year old girl be told that her daughter is pregnant, even if the girl wishes for the situation to be kept confidential? The parents of the child would certainly want to know about their daughters pregnancy, and as the child is under the legal age for such responsibilities , should it be the parents right to know. Cosmetic surgery on the NHS raises a few eye-brows. People who receive burns and other devastating injuries to the face who are less well-off often have their social lives shattered by receiving these injuries and not being able to afford private surgery. ...read more.

What is right, what is wrong? Finally we come to euthanasia, a mercy killing by means of non- treatment (passive) or deliberately attempting to end the life quickly and painlessly (active). This has been debated widely especially between pro-life groups (including the catholic church) and pro-euthanasia groups such as EXIT. Should the right to die be the responsibility of the person involved or the doctor? If the patient is in a 'persistent vegetative state' then who should decide their fate, the doctors or the family? The legal situation of euthanasia is very cloudy throughout the world, in England legal precedents are commonplace and these precedents make the law more complicated. In the Netherlands euthanasia is illegal but tolerated by the authorities if a certain procedure is applied, prosecution if this procedure is applied is rare. The Tony Bland case was a legal precedent in England when the courts allowed for him to be euthanised after his brain shrunk through oxygen starvation during the Hillsborough disaster which left him in a 'persistent vegetative state'. ...read more.

A case which would have been an excellent milestone did not go to court as the child in question died in his home from cerebal palsy. The parents of Thomas Creedon, who could not hear or see, claimed that their son was paralysed, had constant fits, was in constant pain and suffering by being forced to stay alive. The Times newspaper states that 'Thomas's doctors wanted to continue feeding him and were set to oppose his parents application. They disputed the Creedons belief that he was constantly in pain. Mrs Creedon had said "Thomas has a very distressing existence and I find it difficult to see how the medical profession in this particular area is prepared to perpetuate that suffering, no matter what the realistic outcome is likely to be.".'This was a case of distress for Mrs Creedon. Euthanasia raises many questions, is a doctor a judge or is he just a doctor, is one who involves oneself in euthanising another a saint or a sinner? What constitutes unbearable pain, whose dcision is it? All of these questions and many more all constitute to the cloudy and complicated legal system. Should euthanasia be legalised, is it right. ?? ?? ?? ?? Stephen McManus ...read more.