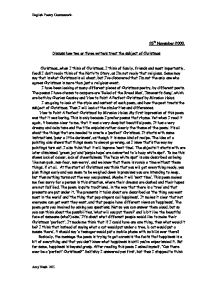 Discuss how two or three writers treat the subject of Christmas

28th November 2000. Discuss how two or three writers treat the subject of Christmas Christmas...when I think of Christmas, I think of family, friends and most importantly, food! I don't really think of the Nativity Story, as I'm not really that religious. Some may say that is what Christmas is all about, but I've discovered that I'm not the only one who agrees Christmas is more than just a religious event. I have been looking at many different pieces of Christmas poetry, by different poets. The poems I have chosen to compare are 'Ballad of the Bread Man', 'Innocent's Song', which are both by Charles Causley and 'How to Paint A Perfect Christmas' by Miroslav Holus. I am going to look at the style and content of each poem, and how the poet treats the subject of Christmas. Then I will look at the similarities and differences. 'How to Paint A Perfect Christmas' by Miroslav Holus. My first impression of this poem was that it was boring. This is only because I prefer poems that rhyme. Yet when I read it again, it became clear to me, that it was a very deep but beautiful poem. It has a very dreamy and calm tone and the title explains rather clearly the theme of the poem; it's all about the things that are needed to create a 'perfect' Christmas. It starts with some instructions, 'pour a little darkness', as though it is some kind of recipe. The idea of a painting also shows that things seem to always go wrong, as I know that's the way my paintings turn out. I also think that it will improve 'next time'. The objects it starts with are later dismissed; 'green joy' and 'purple hope' are converted to 'a hazy white spot'. To me this shows lack of colour, lack of cheerfulness. The 'hazy white spot' is also described as being 'like non-pain, non-fear, non-worry', and we know that there is rarely a time without these things, if at all. ...read more.

At Christmas there are lots of excited, little children, so he could be associated with Christmas as there are lots of children for him to deceive and kill. Herod is cunning, convincing the children to come to him, to believe that he is friendly. But Charles Causley is also as cunning, as he makes us believe that it is Santa first, but then we discover that it is really Herod. He uses one simile, 'smiling stranger' and one alliteration, 'dancing, double taking'. My overall impression of the poem was that Herod was a dangerous man, who won children over by lying to them, 'double-talking'. 'Ballad of the Bread Man' by Charles Causley. My first impression was great- it rhymes. The poem also had the structure A, B, C, B. This poem is an original version of the Nativity Story which has been deliberately made to be comical. I think it is done rather cleverly as it includes things from the Bible, so it's traditional, but that has been adapted and jazzed up so it's suitable for all ages, 'God in his big gold heaven, sitting in his big blue chair.' This is an excellent way of describing the sky and heaven. The title has also been cleverly thought out, 'Ballad of the Bread Man' is a good title as Jesus is often associated with 'bread'. In the Last Supper Jesus offers 'bread' and wine to his disciples, therefore a good connection to the Bible story. However, this is not the only religious reference in the poem. In fact most of the poem's stanzas are modernised so it is more understandable. I have chosen my favourite three stanzas to explain. ' Joseph was in the workshop Planing a piece of wood. "The old man's past it," the neighbours said. "That girl's been up to no good."' This stanza shows us how hard it must have been for Mary, as the neighbours were forever gossiping about her and Joseph. ...read more.

But then I realised it was all in the humour of Christmas. Christmas is supposed to be a time when everybody is happy, laughing. I feel that Charles Causley just wanted to liven the traditional, boring story up. I don't think he wrote it intentionally just to hurt religious people, he just wanted people who do not enjoy Bible stories to take interest. I know when someone mentions the word 'Bible' I think that it's going to be boring. At least now people may actually understand the Nativity Story, as it has been modernised for their benefit. The best part of this poem was how God and his surroundings were described, 'God and his big gold heaven, sitting in his big blue chair'. Charles Causley couldn't have described it any better. It's quite simple, but full of life. I imagine him every time I read those lines and it seems so beautiful up there in the sky. Nobody knows what heaven really looks like, they just presume. 'Gold' is such a warm colour, it makes me think how peaceful, but grand it must be in heaven. I've never really enjoyed reading poetry, as I've always thought that it was uninteresting. But since we have been reading so much of it I have actually started to enjoy some pieces. I've realised that not all poetry is doom and gloom, if you take the time, you actually discover that it has meaning and depth. Not something you should just discard. I have also begun to appreciate poetry even if it doesn't rhyme. Some of the best pieces I've read haven't rhymed, but they're just as good as pieces that do. An example of this is 'How to create a Perfect Christmas'. It wasn't as good as 'Ballad of the Bread Man' but the words were meaningful and creative. Poetry is a good way to express your feelings towards Christmas, and both poets have done just that! English Poetry Coursework. Amy Nash 10H. ...read more.