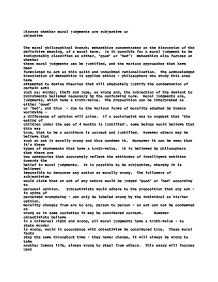 Discuss whether moral judgments are subjective or objective

Discuss whether moral judgments are subjective or objective The moral philosophical branch; metaethics concentrates on the discussion of the definitive meaning, of a moral term. Is it possible for a moral judgment to be indisputably classified as either, 'good' or 'bad'? Metaethics also focuses on whether these moral judgments can be justified, and the various approaches that have been formulated to act as this solid and undoubted rationalization. The acknowledged translation of Metaethics is applied ethics - philosophers who study this area have attempted to devise theories that will adequately justify the condemnation of certain acts such as; murder, theft and rape, as wrong and, the subjection of the deviant to punishments believed necessary by the conforming norm. Moral judgments are, judgments, which have a truth-value. The preposition can be interpreted as either 'good' or 'bad', and thus - due to the various forms of morality adopted by humans worldwide - a difference of opinion will arise. If a sociologist was to suggest that 'the eating of children under the age of 4 months is justified', some beings would believe that this was true, that to be a carnivore is correct and justified. However others may be believe that such an act is morally wrong and thus condemn it. Moreover it can be seen that it's these types of statements that have a truth-value. It is believed by philosophers that there are two categories that accurately reflect the attitudes of intelligent entities towards the belief in moral judgments. It is possible to be subjective, whereby it is believed impossible to denounce any action as morally wrong. The followers of subjectivism would claim that an act of any nature would be judged 'good' or 'bad' according to personal opinion. Subjectivists would adhere to the proposition that any act - in spite of perceived wrongdoing - can only be labeled wrong by the individual as his/her opinion. ...read more.

What can be defined as true and as false depend on what has been written in the holy texts. However a problem with this is that who is to say what is the word of God and what is not, even if it is the word of God it is still open to interpretation. This is adopted by many faiths, for example in Christianity where it is the attitude of all believers that God is the ultimate judge of man- kind, it is this entity that decides what is right and wrong, this can be seen in the 10 commandments - that all Christians are expected to advocate. When questioning whether a moral judgment is morally right or wrong, the holy texts are consulted and if it reflects the written will of God then it is right, if not then it is wrong. However Plato established a strong and unshakable criticism that has yet to be countered in his book entitled Euthypro. He asked the simple question:' are things God commands good because they are commanded by God, or intrinsically good in themselves?' This has come to be known as the Euthyphro problem, and leaves Theological Moral Realism weak and irrational. If Gods commands were good because they are not commands from God, then this would suggest that morality is merely the whims of the creator. Furthermore it could be argued that if God made it just to eat young babies, then it would indeed be considered justifiable because God had said so. Moreover, if the reply is that, Gods commands are inherently good, with or without the approval of God them it is viable to suggest and accept that God is then not needed for morality as it is independent of God, and therefore making God unnecessary. The one single strength to this argument is that morality is not something that humans can ever succeed in understanding - it is a complex and inconceivable idea that only a higher being can process. ...read more.

As humans are free to choose their own stance on moral topics, moral judgments will not be coherent and henceforth, they must risk and accept the results and consequences of the morals and values that they themselves have chosen to hold. These moral beliefs are not absolute moral truths but rather and extension of ones personality. Therefore to conclude it is evident that there are many arguments in favor of both subjectivism and objectivism. Utilitarianism focuses on the premise that whatever gives most pleasure to the most number of people can be considered a moral judgment. However, naturalism would suggest that whatever acts promotes an individual physically, intellectual, mentally, emotionally and spiritually must be considered a moral fact upon which judgments should be made. Theological Moral Realism nevertheless, is of the opinion that all moral facts come from a higher being. The universal and infinite rights and wrongs are written in the holy texts and should be abided too rigorously. In opposition nonetheless is subjectivism; the fundamental arguments in this school of thought is Emotivism - which basis's its foundations on the belief that moral judgments can be denounced as simply personal opinion, which hold no weight to anyone other than themselves. An extension of emotivism furthermore is prescriptivism, which claims that moral judgments should be considered as advice, upon which people are free act in anyway that they believe correct. Existentialists, would argue that instead of the existence of eternal moral facts, the individuals belief in right and wrong are merely part of their personality. As the philosopher Nietzsche stated: ' I must find a truth that is true...... the idea for which I can live and die', the existence of this truth is still concealed and has yet (if ever) to be discovered. Word Count 3,443 (sorry but I started and just couldn't stop - it just a shame I don't need to write a dissertation for philosophy, because this could be it) Happy Marking! ...read more.