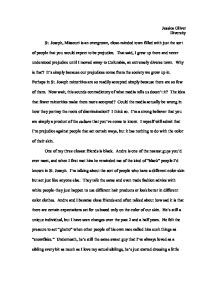 Jessica Oliver Diversity St. Joseph, Missouri is an overgrown, close-minded town filled with just the sort of people that you would expect to be prejudice. That said, I grew up there and never understood prejudice until I moved away-to Columbia, an extremely diverse town. Why is that? It's simply because our prejudices come from the society we grow up in. Perhaps in St. Joseph minorities are so readily accepted simply because there are so few of them. Now wait, this sounds contradictory of what media tells us doesn't it? The idea that fewer minorities make them more accepted? Could the media actually be wrong in how they portray the roots of discrimination? I think so. I'm a strong believer that you are simply a product of the culture that you've come to know. I myself will admit that I'm prejudice against people that act certain ways, but it has nothing to do with the color of their skin. One of my three closest friends is black. Andre is one of the neatest guys you'd ever meet, and when I first met him he reminded me of the kind of "black" people I'd known in St. ...read more.

On the other hand, I work with a lot of poor people who struggle to make ends meet from month to month-about half of whom are some sort of minority. They are awesome individuals. They may talk a little differently than I do and even have some very different values, but their culture is close enough to my own that we can get along and even have a lot of fun together. I enjoy working because we reserve judgment, respect each others differences and come from cultures that the others at least attempt to understand. In this modern day and age we try very hard to reduce the effects of discrimination in our society, but it is such a normal human reaction that we will probably never be able to completely rid our society of these preconceptions about our differences. I think as a country we've become a lot better at accepting women and different races, but as the world continues to evolve into a more accepting and global community there will be new battles to fight. Currently the issues seem to be religions and homosexuals. ...read more.

However, there are of course a few things that will help this process. First of all, we need to continue learning to understand each other better. Since 9-11 Muslims have done a good job trying to teach the average American what their religion actually stands for and without those efforts they probably would have suffered a lot more discrimination. However, we need more of that. We need continued education about diversity and differences to help make those things less intimidating and scary. We need to have our similarities pointed out. Also, individuals simply need to be aware of their own prejudices and try not to spread those. For instance, my mom has always openly admitted to us that though she accepts people of all races, she has some prejudices against African-Americans. However, she's worked very hard to make sure that isn't passed on to my sisters and I. She accepts that she may not ever be able to find a black man "attractive" but she has always tried to make sure those judgments and opinions aren't passed onto my sisters and I. If individuals are aware of these things and make efforts to help the next generation become even more accepting, then eventually our society will become a lot more accepting. ...read more.