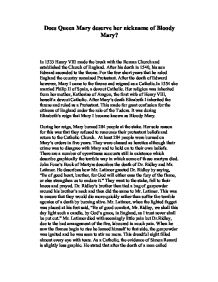 Does Queen Mary deserve her nickname of b****y Mary?

Does Queen Mary deserve her nickname of b****y Mary? In 1533 Henry VIII made the break with the Roman Church and established the Church of England. After his death in 1540, his son Edward ascended to the throne. For the few short years that he ruled England the country remained Protestant. After the death of Edward however, Mary I came to the throne and reigned as a Catholic.In 1554 she married Philip II of Spain, a devout Catholic. Her religion was inherited from her mother, Katherine of Aragon, the first wife of Henry VIII, herself a devout Catholic. After Mary's death Elizabeth I inherited the throne and ruled as a Protestant. This made for great confusion for the citizens of England under the rule of the Tudors. It was during Elizabeth's reign that Mary I became known as b****y Mary. During her reign, Mary burned 284 people at the stake. ...read more.

Mr. Latimer, when the lighted f****t was placed at his feet said, "Be of good comfort, Mr. Ridley, we shall this day light such a candle, by God's grace, in England, as I trust never shall be put out." Mr. Latimer died with seemingly little pain but Dr.Ridley, due to the bad arrangement of the fire, laboured in much pain. When he saw the flames begin to rise he leaned himself to that side, the gunpowder was ignited and he was seen to stir no more. This dreadful sight filled almost every eye with tears. As a Catholic, the evidence of Simon Renard is slightly less graphic. He stated that after the death of a man called Roger, bystanders gathered up the ashes and bones and wrapped them in paper to preserve them. No evidence such as that quoted above can be treated as totally honest and unbiased. Every person would put their own interpretation on the events as they happened. ...read more.

The average person felt that this was a totally unjust and s******c manner of dealing with what was a religious matter and felt that Mary could have possibly achieved her aim of a Catholic country without resorting to bloodshed. Even Simon Renard in his account of the execution of the first Protestant to die stated," I think it would be wise not to be too firm against the protestants, otherwise I foresee that the people may cause a revolution." I feel very strongly that Mary deserved the name of "b****y Mary" because of the terrible suffering she caused to so many people in the name of religion. She could possibly have achieved her aim of a Catholic country by the use of argument and persuasion instead of resorting to murder. Her methods also ensured that many Englishmen grew to hate and fear her. My conclusions are based on the facts that were presented and on the eyewitness accounts of the time. By Elizabeth Byles ...read more.