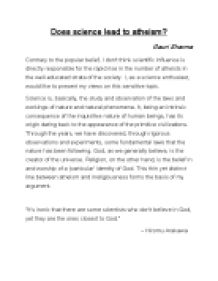 Does science lead to atheism?

﻿Does science lead to atheism? Gauri Sharma Contrary to the popular belief, I don?t think scientific influence is directly responsible for the rapid rise in the number of atheists in the well-educated strata of the society. I, as a science enthusiast, would like to present my views on this sensitive topic. Science is, basically, the study and observation of the laws and workings of nature and natural phenomena. It, being an intrinsic consequence of the inquisitive nature of human beings, has its origin dating back to the appearance of the primitive civilizations. Through the years, we have discovered, through rigorous observations and experiments, some fundamental laws that the nature has been following. ...read more.

The laws of nature sometimes show such distinct analogies, that it is impossible to believe that the creation of the universe could have been a result of randomized events. We can compare fluid flow to electric flux and human blood vessels to xylem and phloem! The gravitational and electrical laws are parallel to one another, while being fundamentally different! In words of Richard P. Feynman, a renowned theoretical physicist, we are observers of a great ?chess? game played by the Gods, and we occasionally discover new rules. Each of them provide even more reasons to believe in the presence of a higher entity. Though for religion, I may not say the same. It?s quite natural and fairly common for science enthusiasts, like myself, to start questioning the validity of certain customs, traditions, superstitions and astrological theories that have not been validated by scientific evidence. ...read more.

It is not even preventing agnosticism, which is the belief that nothing can be known about God. But, precisely, agnosticism accepts the inability of humans to know anything about God, while atheism denies God?s very existence. They are very often used synonymously, but indeed hold different meanings altogether. Science is merely a subject to satisfy the curiosity of over-nosy and speculative individuals who find nature too fascinating and marveling to just sit and stare at, without attempting to gain a deeper knowledge about her! But it is also the only path to enlightenment and greater understanding of the material world. I would like to end this essay with the following lines: ?I think nature's imagination is so much greater than man's, she's never going to let us relax!? 1. Richard P. Feynman ...read more.