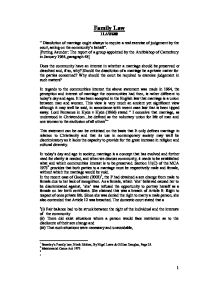 Does the community have an interest in whether a marriage should be preserved or dissolved and, if so, why?

Family Law 1LAW600 " Dissolution of marriage ought always to require a real exercise of judgement by the court, acting on the community's behalf". [Putting Asunder: The report of a group appointed by the Archbishop of Canterbury in January 1964, paragraph 48] Does the community have an interest in whether a marriage should be preserved or dissolved and, if so, why? Should the dissolution of a marriage be a private matter for the parties concerned? Why should the court be required to exercise judgement in such matters? In regards to the communities interest the above statement was made in 1964, the perception and interest of marriage the communities had then, is rather different to today's day and ages. It has been accepted in the English law that marriage is a union between man and women. This view is very much an ancient yet significant view although it may well be said, in accordance with recent case law that is been tipped away. Lord Penzance in Hyde v Hyde (1866) stated " I conceive that marriage, as understood in Christendom...be defined as the voluntary union for life of man and one woman to the exclusion of all others1" This statement can be can be criticised on the basis that It only defines marriage in relation to Christianity and that its use in contemporary society may well be discriminatory as it lacks the capacity to provide for the great increase in religion and cultural diversity. In today's day and age in society, marriage is a concept that has evolved and further need for clarity is needed, and when we discuss community, it needs to be established what and which communities interest is to be preserved. Section 11(C) of the MCA 19732 provides that both parties to a marriage must be respectively male and female, without which the marriage would be void. In the recent case of Goodwin (2002)3, the P had obtained a sex change from male to female due to her lack of recognition. ...read more.

There has been considerable public debate on this matter, with opinion divided upon whether the proposals would make divorce too easy and undermine marriage. Most commentators felt, however, that reform was long overdue and hoped that the provisions of the Family Law Act 1996 were going to address the problem of the past. Further criticism of the present system concerns the enormous financial cost of protracted litigation for the public purse, and there are those that have suggested that legal aid should be withdrawn in contested divorce cases and ancillary relief applications. Others suggest that it should only be available if the parties agree to conciliation. Conciliation is a process whereby an impartial and trained individual meets with the parties and encourages them to reach an agreement on areas of dispute such as a financial provision and arrangements for the children. This reduces bitterness, saves costs and has an important role in making divorce less traumatic and adversarial. Conciliation may take place in court, and in 1971 a Practice Direction allowed courts to refer cases to the court's welfare office if it was thought he could help with a conciliation process. Initially, pilot schemes were established, but have spread throughout the country and allow emotional and possibly confrontational issues to be handled in a constructive manner. Conciliation is now compulsory in cases involving arrangements for children and s8 orders when the parties must meet with the welfare officer together with their legal advisers and any children over nine to try to reach an agreement. Criticism have been made, in that the parties often feel under pressure to reach an agreement in a short time, and it is very important that the parties are legally represented and kept fully informed. The law commission and the Green Paper did not suggest making conciliation compulsory in all divorces, as it is its voluntary nature that ensures c0-opertation and a willingness to reach an agreement. ...read more.

Cohabitants should have some form of protection but that merely cannot be compared to the protection married couples have. Marriage is a lifetime contract and commitment; implanting cohabitation rights into legislation could in turn affect society's morals and values. Although times are changing, we should not forget tradition as that itself does play a big role in our lively hood. Taking a chauvinist approach it would appear then men would be in a better position if they have a cohabitation relationship then a marriage. As for a married man continuing to live with a partner, marriage is not a distinguishable condition, as there are no benefits over cohabitation; for a married women continuing to live with a partner, there are marginal benefits over cohabitation, but only obtained on the death of a man such as the widow's benefits, available for those women aged 45+. Again for a married man whose marriage ends in divorce, there is usually more serious damage to his life then if he had cohabited. For those married fathers with children, the damage may be very serious, however for a married women whose marriage ends in divorce, there are considerable benefits compared with cohabitants. Women now almost automatically obtain custody of children no matter what their behaviour, and also profit financially from divorce. This can be interpreted by Judicial Static's Annual Report 199312, in which the divorce cases that year was 162,579, and the divorces granted by gender to women was 112,000 (71%) and men 45.000 (29%). It could be stated that the 'dissolution of marriage ought always to require a real exercise of judgement by the court, acting on the Community's behalf' is not well maintained. Those who drafted the ECHR including Article 12, granting the right of "men and women to... marry" must have done so on the understanding that the step " to marry" would * Result in the individual being in a distinguishable condition from cohabitation; * And that it would provide the individual with substantive benefits and protection not available in cohabitation. ...read more.