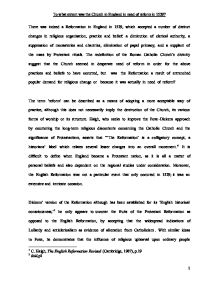 There was indeed a Reformation in England in 1529, which accepted a number of distinct changes in religious organisation, practice and belief: a diminution of clerical authority, a suppression of monasteries and chantries, elimination of papal primacy, and a supplant of the mass by Protestant rituals. The redefinition of the Roman Catholic Church's divinity suggest that the Church seemed in desperate need of reform in order for the above practices and beliefs to have occurred, but was the Reformation a result of entrenched popular demand for religious change or because it was actually in need of reform? The term 'reform' can be described as a means of adopting a more acceptable way of practice, although this does not necessarily imply the destruction of the Church, its various forms of worship or its structure. Haigh, who seeks to improve the Foxe-Dickens approach by countering the long-term religious discontents concerning the Catholic Church and the significance of Protestantism, asserts that "'The Reformation' is a colligatory concept, a historians' label which relates several lesser changes into an overall movement.'1 It is difficult to define when England became a Protestant nation, as it is all a matter of personal beliefs and also dependent on the regional studies under consideration. Moreover, the English Reformation was not a particular event that only occurred in 1529; it was an extensive and intricate occasion. Dickens' version of the Reformation although has been established for its 'English historical consciousness,'2 he only appears to uncover the fruits of the Protestant Reformation as opposed to the English Reformation, by accepting that the widespread indications of Lollardy and anticlericalism as evidence of alienation from Catholicism . With similar ideas to Foxe, he demonstrates that the influence of religious upheaval upon ordinary people provides substantial evidence that the Church was disposed for reform. He proclaimed that the Roman Catholic Church was a seemingly corrupt and inefficient institution where the leaders of the Church were constantly perceived as fraudulent and immoral. ...read more.

Evidence for activity of Lollardy derives from records from heresy trials; mostly collected by Foxe. Although Foxe provides invaluable information about the growing dominance of Protestantism, it can ultimately be seen as Protestant propaganda. Attempting to sell his book, Foxe and even Dickens give too much weight to the Lollards and the developing strength of Protestantism. In fact in the diocese in Lincoln, the growing pressure of Lollardy was significantly contained; the Lollardy in Buckinghamshire, which posed a threat for twenty years was destroyed by the 1540s Bishop Longland. 13 The Lollards do demonstrate that there were nonconformists from the Church, yet this does not show the extent of popular feeling they excited from the people. It is difficult to regard the Lollards as a major threat to the Church or as a substantial disaffection from the conventional religion. More claimed in 1533 that if anyone surveyed the English dioceses 'except London and Lincoln he shall scant in anyone of all remnant find punished for heresy.' 14 The "increase" in Lollardy may just perhaps reveal the hardening of persecution, rather than a demand for reform. Lutheranism was the final continental influence on the English Church life in the 1520s. Although it was not until late in the decade that Lutheranism became a serious threat, it still existed covertly in a Catholic country. How far they were forerunners of the Reformation is debatable because it is difficult to identify cases of Lutheranism since this merged with local traditions of dissent. There were dynamic Lutheran activists like Fish and Tyndale, who distributed their works in London whilst the Reformation Parliament was established in 1529. 15 It has been claimed within the works of More that the condemnations against the Church were part of a 'Lutheran conspiracy to discredit the Church and weaken its resistance to heresy.'16 The people of London were in regular contact with the continental reformed Churches; London merchants appeared to import forbidden Lutheran books or witnessed Lutheran services. ...read more.