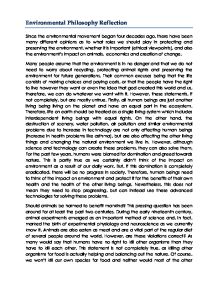 Environmental Philosophy Reflection Since the environmental movement began four decades ago, there have been many different opinions as to what roles we should play in protecting and preserving the environment, whether it is important (ethical viewpoints), and also the environment's impact on animals, economics and creation of change. Many people assume that the environment is in no danger and that we do not need to worry about recycling, protecting animal rights and preserving the environment for future generations. Their common excuses being that the life consists of making choices and paying costs, or that the people have the right to live however they want or even the idea that god created this world and us, therefore, we can do whatever we want with it. However, these statements, if not completely, but are mostly untrue. Firstly, all human beings are just another living being living on the planet and have an equal part in the ecosystem. Therefore, life on earth should be treated as a single living system which includes interdependent living beings with equal rights. ...read more.

This is a rule of nature. But eating other species of animals is a different thing and this can balance out the number of animals living in the planet. After all, if lions and other similar predators can eat other animals why can't we eat them? But, rapid population growth can cause a serious problem as it can lead to excess meat consumption. Although this problem was mainly solved by selective breeding of cows, sheep, chickens and other meats, there were still some animals like dolphins (eaten by Japanese and other Asian people) that were very close to extinction. Hence, it is right for the non-vegetarians to eat specific meats, but there should be a control on the amount consumed. Species that are rare or close to extinction or cannot be selectively bred should not be consumed and instead should be protected. On the other hand, when animal experimentation comes into question, it is a complete different story. In this case, we can actually agree to stop these cruel experiments as it may look like it is helping mankind, but many of these experiments are useless and do not show any proper results, therefore sacrificing several animal lives for no reason. ...read more.

Growth can also bring with it higher standards of living and a higher number of people working. Nevertheless, if people are forced to live in an unhealthy environment, it cannot be considered as a 'higher standard of living' even for the richer people. Therefore, people need to keep a balance between the amounts spent on technology and the environment. In fact, as stated before, with the help of more research, we can use technology and science itself to help the environment, create good jobs and maintain a high standard of living. Hence, if we want to create a change we must act now, or else our future generations may suffer. Some damages to the environment are also irreplaceable or very expensive, costing us fortunes. We must therefore, change ways of doing things which are too harmful to the nature and the environment. We can achieve this by using renewable resources, recycling materials, using more efficient machines, stopping killings of living organisms for no reason, stabilizing population growth and preserving the natural landscape. Not just the businesses and industries, but everyone can help in doing this job and only this team work can help create any change that is going to make the future a better place to live in. ...read more.