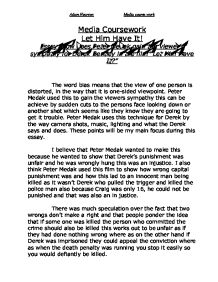 Essay: how does Peter Medak gain the viewers sympathy for Derek Bentley in the film Let Him Have It? The word bias means that the view of one person is distorted,

Media Coursework Let Him Have It! Essay: how does Peter Medak gain the viewer's sympathy for Derek Bentley in the film "Let Him Have It?" The word bias means that the view of one person is distorted, in the way that it is one-sided viewpoint. Peter Medak used this to gain the viewers sympathy this can be achieve by sudden cuts to the persons face looking down or another shot which seems like they know they are going to get it trouble. Peter Medak uses this technique for Derek by the way camera shots, music, lighting and what the Derek says and does. These points will be my main focus during this essay. I believe that Peter Medak wanted to make this because he wanted to show that Derek's punishment was unfair and he was wrongly hung this was an injustice. I also think Peter Medak used this film to show how wrong capital punishment was and how this lad to an innocent man being killed as it wasn't Derek who pulled the trigger and killed the police man also because Craig was only 16, he could not be punished and that was also an in justice. There was much speculation over the fact that two wrongs don't make a right and that people ponder the idea that if some one was killed the person who committed the crime should also be killed this works ...read more.

Craig's companions leave him all alone with Derek once they saw the owner of the butchers shop Craig decides to go o a near by shop and break in to it. Craig climbs a drain pipe to reach the roof shortly after Derek joins Craig on the roof during this time a woman who live cross the road tells her husband that there is some on the roof who then calls the police. When he police turns up Derek turns desperate a he tries to leave the roof, Derek becomes so desperate that he starts to fight with crag this creates sympathy for Derek as he is upset about getting in to trouble Derek gives up trying to fight Derek falls to the ground and he says "my dads gonna kill me" this creates sympathy for Derek as he is truly worried about what his dad will say to him or what will happen this also creates sympathy like when he was fighting with Craig. Craig opens fire on the local police first Craig holds a gun to the police officer and then Derek says "let him have it Chris" Craig believed that this meant start shooting and so he did he shot the police man in the shoulder the police man scrabbles to his feet and arrests Derek. ...read more.

Derek is also seen praying before he is hung this creates sympathy as this will be his last actions alive. Derek is seen with a fabric bag with tied around his head and his hands and feet tied together the last shot was of Derek's shoes falling to the ground. This was the point at which Derek receives the most sympathy as this is the point where a totally innocent man is wrongly hung. In conclusion I think this film shows how inhumane capital punishment was and I believe Peter Medak dose this very successfully in this film. The main message of this film is to show people how wrong capital punishment was and how mistakes was made and how innocent people were sentenced to death also this film goes on to prove that the innocent could be hung and that people who committed crimes could escape with a minimal punishment this is shown by Christopher Craig and the end as on the film it says that Craig only received ten years and then was released back in to the community and this was wrong as Craig would get out of prison at 26 and he would have the rest of his life to live where as Derek paid the ultimate price with his life. Over all I think Peter Medak uses bias to great effect and his use of dramatic devices all add to the sympathy for Derek. ?? ?? ?? ?? Adam Hearson Media course work ...read more.