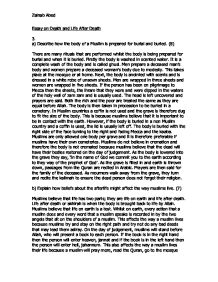 Essay on Death and Life After Death

Essay on Death and Life After Death 3. a) Describe how the body of a Muslim is prepared for burial and buried. (8) There are many rituals that are performed whilst the body is being prepared for burial and when it is buried. Firstly the body is washed in scented water. It is a complete wash of the body and is called ghusl. Men prepare a deceased man's body and women prepare a deceased woman's body due to modesty. This takes place at the mosque or at home. Next, the body is anointed with scents and is dressed in a white robe of unsewn sheets. Men are wrapped in three sheets and women are wrapped in five sheets. If the person has been on pilgrimage to Mecca then the sheets, the ihram that they wore and were dipped in the waters of the holy well of zam zam and is usually used. ...read more.

(7) Muslims believe that life has two parts; they are life on earth and life after death. Life after death or akhirah is when the body is brought back to life by Allah. Muslims believe that life on earth is a test. Whilst on earth, every action that a muslim does and every word that a muslim speaks is recorded in by the two angels that sit on the shoulders of a muslim. This affects the way a muslim lives because muslims try and stay on the right path and try not do any bad deeds that may lead them astray. On the day of judgement, muslims will stand before Allah, who will present a book to each person. If the book is in the right hand then the person will enter heaven, jannat and if the book is in the left hand then the person will enter hell, jahannum. This also affects the way a muslim lives their life because a muslim will pray more, read the Quran, go to ...read more.