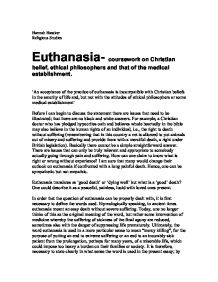 Euthanasia- coursework on Christian belief, ethical philosophers and that of the medical establishment.

Hannah Hawker Religious Studies Euthanasia- coursework on Christian belief, ethical philosophers and that of the medical establishment. 'An acceptance of the practice of euthanasia is incompatible with Christian beliefs in the sanctity of life and, but not with the attitudes of ethical philosophers or some medical establishment' Before I can begin to discuss the statement there are issues that need to be illustrated; that there are no black and white answers. For example, a Christian doctor who has pledged hypocrites oath and believes whole heartedly in the bible may also believe in the human rights of an individual, i.e., the right to death without suffering (remembering that in this country a vet is allowed to put animals out of misery and suffering and provide them with a merciful death, a right under British legislation). Basically there cannot be a simple straightforward answer. There are issues that can only be truly relevant and appropriate to somebody actually going through pain and suffering. How can one claim to know what is right or wrong without experience? I am sure that many would change their outlook on euthanasia if confronted with a long painful death. Hence, one can be sympathetic but not empathic. Euthanasia translates as 'good death' or 'dying well' but what is a 'good' death? One could describe it as a peaceful, painless, lucid with loved ones present. In order that the question of euthanasia can be properly dealt with, it is first necessary to define the words used. Etymologically speaking, in ancient times euthanasia meant an easy death without severe suffering. Today, one no longer thinks of this as the original meaning of the word, but rather some intervention of medicine whereby the suffering of sickness of the final agony are reduced, sometimes also with the danger of suppressing life prematurely. Ultimately, the word euthanasia is used in a more particular sense to mean "mercy killing", for the purpose of putting an end to extreme suffering or an end to an incurably sick ...read more.

It is totally different from murder. There is no evidence to suggest that strictly controlled voluntary euthanasia would inevitably lead to the killing of the sick or elderly against their will. As Ronald Dworkin, professor of Law at Oxford and New York University, said in 1994: "Of course doctors know the moral difference between helping people who beg to die and killing those who want to live. If anything, ignoring the pain of terminally ill patients pleading for death rather than trying to help them seems more likely to chill a doctor's human instincts." People who do not agree with voluntary euthanasia often refer to the 1967 Abortion Act. They argue that the numbers of abortions which now take place every year show that the safeguards set out in the Abortion Act have been ignored. They argue that this example should be taken as a warning of what could happen if helping people who are terminally ill to die is made legal. They believe that the law would not be able to control a huge amount of euthanasia cases, many of which would be involuntary. However, abortion is a very different issue to assisted dying. It is also important to remember that people choose to have abortions, they are not forced on people. There is no evidence to suggest that assisted dying will be forced on anyone either. Some people who do not agree with voluntary euthanasia argue that if it was legalised, it would damage the moral and social foundation of society by removing the traditional principle that man should not kill, and reduce the respect for human life. However, the idea that we should not kill is not absolute, even for those with religious beliefs - killing in war or self-defence is justified by most. We already let people die because they are allowed to refuse treatment which could save their life, and this has not damaged anyone's respect for the worth of human life. ...read more.

In 1994 a survey published in the British Medical Journal showed that some doctors already help patients to die. Here is a table of results from a questionnaire carried out by the Sunday Times in 1998- Question Yes No Have you ever been asked by a patient to help them die? 44% 56% Have you ever assisted a patient's death at their request? 15% 83% Do you think doctors should have the power to assist death without fear of prosecution: a) by withholding treatment 68% 31% b) by withdrawing treatment 67% 32% c) by administering pain killers in the knowledge that they are likely to shorten life? 60% 37% d) by prescribing lethal drugs for patients to take themselves? 18% 75% Do you believe in a patient's right to die? 63% 33% Do you think it is a good idea for patients to make living wills? 69% 27% Annie Linsell, a campaigner for legalising assisted dying, said before she died in 1997, " The hospice movement consistently maintains that in most cases it manages the pain of terminally ill patients. What they cannot control however, is the loss of personal dignity and that is a very individual criterion that no one but the patient can comment on." From this, The Voluntary Euthanasia Society argues that euthanasia is not about patients giving up on the face of suffering, but indeed having control to decide their destiny. Their motto being; "No euthanasia without palliative care". Hypocrite's oath has a large influence on many doctors, even in contemporary society. It was established over 2,500 years ago in Greece. Part of this oath states: "I will neither give a deadly drug to anybody if asked for it, nor will I make a suggestion to this effect" A doctor who follows this oath also promises not to give a woman an abortion, however in this day and age abortion is actually legal and many, many doctors perform this operation. I would seem that the oath has been updated to modern day medical practices. The British Medical Association is campaigning to update the oath again for euthanasia. ...read more.