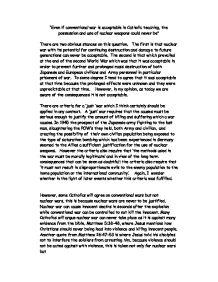 Even if conventional war is acceptable in Catholic teaching, the possession and use of nuclear weapons could never be

"Even if conventional war is acceptable in Catholic teaching, the possession and use of nuclear weapons could never be" There are two obvious stances on this question. The first is that nuclear war with its potential for continuing destruction and damage to future generations can never be acceptable. The second is that which prevailed at the end of the second World War which was that it was acceptable in order to prevent further and prolonged mass destruction of both Japanese and European civilians and Army personnel in particular prisoners of war. To some degree I tend to agree that it was acceptable at that time because the prolonged effects were unknown and they were unpredictable at that time. ...read more.

However the criteria also require that 'the methods used in the war must be morally legitimate' and in view of the long term consequences that can be seen as doubtful; the criteria also require that 'it must not result in disproportionate evils to the enemy population to the home population or the international community'. Again, I wonder whether in the light of later events whether this criteria was fulfilled. However, some Catholics will agree on conventional wars but not nuclear wars, this is because nuclear wars are never to be justified. Nuclear war can cause innocent deaths in seconds after the explosion while conventional war can be controlled to not kill the innocent. ...read more.

Unilateral disarmament and militarily disarmament can be done to reduce threats of war from each nation to another reducing risk of using violence to solve problems, especially nuclear weapons, which can cause deaths as well as damage to nations. In conclusion, I think that if conventional war is acceptable or not acceptable nuclear war should never be allowed anyways, this is because it causes innocent deaths and too much damage to the victims, however, if nuclear war is a possibility of ending a conflict conventional war or any other solution should be considered and used first, it should be considered like a just war. Haakam Sandhu Poetry Re ?? ?? ?? ?? ...read more.