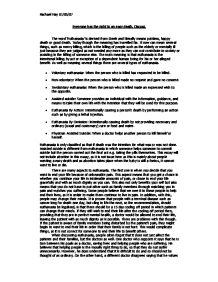 Everyone has the right to an easy death. Discuss.

Everyone has the right to an easy death. Discuss. The word 'Euthanasia' is derived from Greek and literally means painless, happy death or good death. Today though the meaning has travelled far. It now can mean several things, such as mercy killing, which is the killing of people such as the elderly or mentally ill just because they are judged as not needed any more as they can not contribute to society or assisting in the killing of someone else. The main meaning is that euthanasia is the intentional killing by act or exception of a dependent human being for his or her alleged benefit. As well as meaning several things there are several types of euthanasia. * Voluntary euthanasia: When the person who is killed has requested to be killed. * Non-voluntary: When the person who is killed made no request and gave no consent. * Involuntary euthanasia: When the person who is killed made an expressed wish to the opposite. * Assisted suicide: Someone provides an individual with the information, guidance, and means to take their own life with the intention that they will be used for this purpose. * Euthanasia By Action: Intentionally causing a person's death by performing an action such as by giving a lethal injection. ...read more.

On the other hand, a different doctor disagrees saying that he values sitting with dying patients, and that we should not try to control life. He also states that if euthanasia is made legal it would encourage people to chose to end their life prematurely instead of looking for better health care. In addition, doctors would have to live with the guilt that they helped someone die. As the law stands in the UK now, doctors can administer large quantities of morphine to patients in severe pain, which leads to death, but cannot actually kill them. There are worries with euthanasia that if it is made legal, then the state could take over and kill off the elderly or mentally ill, so that they no longer have to pay out as much for pensions or for mental institutes. This would mean that people were being killed by involuntary euthanasia, and it means that we would render the elderly and mentally ill as useless and something that we can dispose of as they cannot contribute to society. This is the same as what happened in the Second World War in n**i Germany. In 1939, Adolph Hitler ordered the mercy killing off all of the sick and disabled in a project called Aktion T 4. ...read more.

The English High Court, the Court of Appeal and the House of Lords all ruled that all food, water and antibiotics might be withdrawn from Tony Bland and sedatives administered so that he would die peacefully. There is also much controversy with this as people debate who this actually benefits. The patient has no say in it, and could have woken up the next day for all we know. It benefits the family as it means they can family let go of the patient and stop living each day thinking what if he wakes up today. In conclusion, euthanasia is not immoral as long as it is voluntary or the decision is taken by a family member in absence of the person not being able to make the decision. Euthanasia should never be left down to the government to control, with them killing people just because the can and it means they would have to pay less pensions out as that is immoral and should not be allowed. By making euthanasia legal it would be beneficial to most people as you never know when you may want to end your suffering or want to die gracefully rather than by choking on your own vomit for example. Therefore, in conclusion everyone should have the right to an easy death, if they want it. Rachael Hay 01/05/07 ...read more.