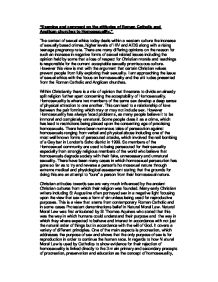 Examine and comment on the attitudes of Roman Catholic and Anglican churches to Homosexuality.

"Examine and comment on the attitudes of Roman Catholic and Anglican churches to Homosexuality." The context of s****l ethics today deals within a western culture the increase of s******y based crimes, higher levels of HIV and AIDS along with a rising teenage pregnancy rate. There are many differing opinions on the reason for such an increase in negative forms of s****l related issues including the opinion held by some that a loss of respect for Christian morals and teachings is responsible for the current acceptable s******y promiscuous culture. However this view is met with the argument that certain Christian values prevent people from fully exploring their sexuality. I am approaching the issue of s****l ethics with the focus on homosexuality and the attitudes presented from the Roman Catholic and Anglican churches. Within Christianity there is a mix of opinion that threatens to divide an already split religion further apart concerning the acceptability of Homosexuality. Homosexuality is where two members of the same s*x develop a deep sense of physical attraction to one another. This can lead to a relationship of love between the pair forming which may or may not include s*x. However Homosexuality has always faced problems, as many people believe it to be immoral and completely unnatural. Some people class it as a crime, which has lead to restrictions being placed upon the consenting age of practising homosexuals. There have been numerous tales of persecution against homosexuals ranging from verbal and physical abuse including one of the most well known forms of persecuted attacks, which involved the nail bombing of a Gay bar in London's Soho district in 1999. So members of the h********l community are used to being persecuted for their sexuality especially from strongly religious members of the world who believe that homosexuals degrade society with their fake, unnecessary and unnatural sexuality. There have been many cases in which h********l persecution has gone so far as to try and reverse a person's h********l nature through extreme medical and physiological assessment stating that the grounds for doing this are an attempt to "cure" a person from their h********l nature. ...read more.

So in this instance a religion that claims to be "all loving" has demonstrated that in some circumstances how ever tolerant a religion appears to be there will always be a certain amount of persecution against Homosexuals. Recently in the news their have been new issues raised following the allowance of civil partnerships concerning the law that should h********l couples be allowed to adopt. This has been met with uproar from the Catholic church who have stated that if this law is passed they will refuse to help gay couples adopt and even go as far as to close down Catholic based adoption agencies. So despite claiming to be a fully tolerant, respectful and all loving religion the Catholic Church seems to show that their opinion towards homosexuality is in some cases excusable from this as it goes against the laws of God. Personally I comprehend the reasons for the Catholics holding the views that they do, especially as they have such a strong amount of evidence stemming both from scripture and Natural Moral Law which only strengthens there case that homosexuality has no place within the church. However I am inclined to believe that the Catholics have overlooked the teachings from Jesus that state "love one another as I have loved you" and "love thy neighbour". Although those teachings where never specifically linked by Jesus to the issue of homosexuality they where meant to be followed by all and applied to every person and in my opinion the Catholics constant deontological standpoint regarding homosexuality means that they sometimes overlook the basic teachings of Jesus, which to me are more important fundamentally than the scriptures laid down based upon a culture from 2000 years ago. However its very clear those in the 21st century western culture homosexuals are being accepted and regarded as just normal people who love one another. It is now possible for openly h********l couples to legally engage in a relationship involving a s****l nature as well as receive a civil partnership. ...read more.

Overall I believe that both the Anglican and the Roman Catholic Church have valid arguments I find it very hard to accept aspects of both. Personally I like and respect the fact that the Catholics make their views very clear and never differ from where they stand as it makes things very easy to understand whereas the Anglican Church has no fix standpoint which therefore makes it very difficult to follow what exactly they believe concerning homosexuality. However I believe that the fact that the Anglican Church in parts approaches the issue in a way that allows for all viewpoints to be taken into account is a much more effective way of approaching it as it allows for a variety of opinions to be openly shown. Personally my view is to err on the side of compassion regarding the issue as although I recognise that certain aspects of the scripture make it clear that homosexuality has no place within Christianity I still believe more in the gospel presentation of a all loving and compassionate Jesus. Jesus was presented to us as being loving and tolerant of all, willing to accept everyone even if they did wrong. The only point where Jesus is presented to be intolerant towards others is when confronted with extremely judgemental people, which could infer that despite the Catholics maintained and respected standpoint regarding homosexuality they are possibly being too judgmental. Because Jesus made it clear that the most important thing to do is to "love one another as I have loved you" I believe that h********l people must certainly be accepted and treated with respect. Whether that means that the Christian community regardless of denomination must accept this to remains to be seen, but it seems to me that if they wish to remain a vital part of the current society they may have to make compromises on certain issues for example the current debate on allowing h********l couples able to adopt children. ...read more.