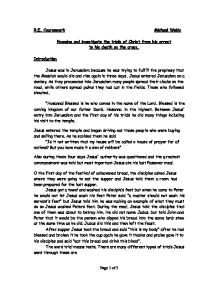 Examine and investigate the trials of Christ from his arrest to his death on the cross.

R.E. Coursework Michael Webb Examine and investigate the trials of Christ from his arrest to his death on the cross. Introduction Jesus was in Jerusalem because he was trying to fulfill the prophesy that the Messiah would die and rise again in three days. Jesus entered Jerusalem on a donkey. As they proceeded into Jerusalem many people spread their cloaks on the road, while others spread palms they had cut in the fields. Those who followed shouted, "Hosanna! Blessed is he who comes in the name of the Lord. Blessed is the coming kingdom of our father David. Hosanna in the highest. Between Jesus' entry into Jerusalem and the first day of his trials he did many things including his visit to the temple. Jesus entered the temple and began driving out those people who were buying and selling there. As he scolded them he said "Is it not written that my house will be called o house of prayer for all nations? But you have made it a den of robbers" Also during those four days Jesus' authority was questioned and the greatest commandment was told but most important Jesus ate his last Passover meal. O the first day of the festival of unleavened bread, the disciples asked Jesus where they were going to eat the supper and Jesus told them a room had been prepared for the last supper. ...read more.

A trial like this should have never taken place because the trial was at night and according to Jewish law trials have to take place in the day, the witnesses should have been interviewed privately and they weren't and trials should have lasted three days but it only lasted one. Many testified against him, but their statements did not agree. Some witnesses stood up and said "we heard him say ' I will destroy this manmade temple and in three days will build another not made by man"'. Yet even then their testimony did not agree. The high priest then stood up and asked Jesus "are you not going to answer? What is this testimony that these men are bringing against you?" But Jesus remained silent and gave no answer. Again the high priest asked him "Are you the Christ the son of the blessed one?" "Yahweh/ I am" Jesus replied "and you will see the son of man sitting on the right hand of the mighty one and coming on the clouds of heaven". The high priest tore his clothes as a sign that Jesus can not go back on what he has just said and that it can not be replaced like the high priest's clothes. "Why do we need any more witnesses?" he asked "You have heard the blasphemy. What do you think?" Blasphemy was so terrible to the Jews because he was saying that he was equal to God and the Jews believed in one almighty God. ...read more.

"so you who are going to destroy the temple and rebuild it in 3 days , come down from the cross and help yourself." "He saved others" they said" but he cannot help himself" After 6 hours it became dark over the land and at the 9th hour Jesus cried out "Eloi eloi lama sabachthani?" which means "My God, my God why have you forsaken me?" Conclusion In conclusion to my essay Jesus had many trials between his arrest to his death on the cross. The trials or tests he had to go through were Physical tests, tests of faith, emotional trials, and he had three legal trials: from the Sanhedrin (Jewish low) Pontius Pilate the roman governor (Roman law) and Herod. He suffered many unfair and unjust trials but with his strength and belief in God he passed all of them. Jesus showed faith, courage, and belief, he died on the cross for us and in doing so he suffered. He did not want to die or face these trials but he had great faith in God and trusted him. I couldn't of shown such faith or believe in God. I would of been too scared of death and the whole unfairness Jesus went through. The main benefits of Christ's trials and death on the cross are that with enough belief and faith in God we can all achieve something if one man can die and suffer for us then we all can give something back to him by ` loving one another' as he taught us. ?? ?? ?? ?? Page 1 of 5 ...read more.