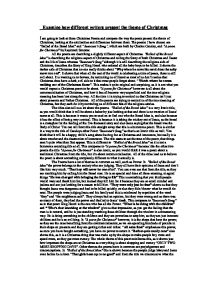 Examine how different writers present the theme of Christmas

Examine how different writers present the theme of Christmas I am going to look at three Christmas Poems and compare the way the poets present the theme of Christmas, looking at the similarities and differences between them. The poems I have chosen are "Ballad of the Bread Man" and "Innocent's Song", which are both by Charles Causley, and "A poem for Christmas" by Raymond Soutster. All the poems are describing a slightly different aspect of Christmas. "Ballad of the Bread Man" is describing the religious aspect of Christmas and telling the Story of both Christmas and Easter and the life of Jesus whereas "Innocent's Song" although it is still describing the religious side of Christmas, describes the Story of King Herod who ordered all the baby boys to be killed. It shows the darker side of Christmas that no one really thinks about "Why when he caws his carol does the salty snow run red". It shows that when all the rest of the world is celebrating a time of peace, there is still evil about. It is warning us to beware, by reminding us of Herod as most of us don't realise that Christmas does have a dark, evil side to it that most people forget about. "Watch where he comes walking out of the Christmas flame". This makes it quite original and surprising, as it is not what you would expect a Christmas poem to be about. "A poem for Christmas" however is all about the commercialisation of Christmas, and how it has all become very superficial and the true religious meaning has been lost along the way. All the time it is trying to remind us that Christmas isn't just about presents and Father Christmas. All of the poems are trying to remind us of the true meaning of Christmas, but they each do it by reminding us of different bits of the religious stories. ...read more.

The beginning of "Innocent's Song" is similar to that of "Ballad of the Bread Man" though as it is childlike because of all the questions. "A poem for Christmas" however is not childlike as a child would never be able to understand "the monumental junkpile of Christmas" and it isn't something a child would think either as they'd be pleased to get presents not complaining about how the true meaning has been lost so this poem is different to the other two as it isn't child like at all and children aren't involved anywhere. "Ballad of the Bread Man" is told by a narrator while "Innocent's Song" is told by a child and even though it is written in an adult way it captures their innocence where as "A poem for Christmas" is told by the poet and so they are all different in that respect. There is lots of imagery used in these poems and a lot of them I found very effective. In "Ballad of the Bread Man" I found the bit where it said "That girls been up to no good" effective because it is suggesting that Mary cheated on Joseph and was anything but a virgin and this is completely different to how we think of Mary as pure and innocent and we always think of her as a virgin as that was part of the reason the story is so amazing and this is a side to the story that you never usually hear. It shows Causley thinks about then story a different way. Also it makes you wonder how Joseph must feel if his wife suddenly gets pregnant and he knows it isn't his. This part always gets left out the story as well so this makes the poem an even more original way of telling the story. The same goes for the line "Mary shook and trembled". ...read more.

candle burning in the centre of the room all cosy and homely but then when you read the whole line again "Watch where he comes walking out of the Christmas flame" because you know Herod is so nasty the image of the flame changes from being a nice, peaceful flame to being a fire that is destructive and causes disaster that humans can't control and it almost seems like the fires of h**l. "Dancing double talking" the dancing is almost like an evil dance as though Herod is rejoicing that he has killed all of these children and is dancing on their graves. The double-talking refers to all his lies and his tongue of gingerbread. This whole stanza is a warning that you shouldn't let your guard down and it reminds us of the terrible side to Christmas that we always forget. The last line "Herod is his name" is the answer to all the questions in the poem and for the first time we realise who the stranger is as throughout the poem we are given hints but we are never told it's Herod until the last line. Through comparing these poems I have come to the conclusion that although they are all about different aspects of Christmas, a lot of the themes raised are the same and all of them are trying to remind us of the true meaning of Christmas. All of the titles are Ironic and none of the poems are what we expected. The tone and narrator are different for each but the two Causley poems have the same rhyme scheme and children are involved in both themes. In all of them one word or phrase changes the whole meaning. The poems meanings are all backed up by the rhythm scheme or in the case of "A poem for Christmas" the lack of one. They are all quite similar but each is a very original way of presenting the aspect of Christmas that they are describing. Dawn Grant 10s ...read more.