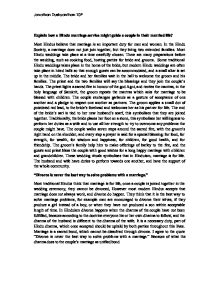 Explain how a Hindu marriage service might guide a couple in their married life?

Explain how a Hindu marriage service might guide a couple in their married life? Most Hindus believe that marriage is an important duty for men and women. In the Hindu Society, a marriage does not just join together, but they bring two extended families. Most Hindu weddings take place at a time carefully chosen. There are many preparations before the wedding, such as cooking food, hosting parties for bride and grooms. Some traditional Hindu weddings takes place in the home of the bride, but modern Hindu weddings are often take place in hired halls so that enough guests can be accommodated, and a small altar is set up in the middle. The bride and her families wait in the hall to welcome the groom and his families. The priest and the two families will say the blessings and they join the couple's hands. The priest lights a sacred fire in honour of the god Agni, and recites the mantras, in the holy language of Sanskrit, the groom repeats the mantras which asks for marriage to be blessed with children. The couple exchanges garlands as a gesture of acceptance of one another and a pledge to respect one another as partners. The groom applies a small dot of powdered red lead, to the bride's forehead and welcomes her as his partner for life. The end of the bride's sari is tied to her new husband's scarf, this symbolises that they are joined together. Traditionally, the bride places her foot on a stone, this symbolises her willingness to perform her duties as a wife and to use all her strength to try to overcome any problems the couple might have. The couple walks seven steps around the sacred fire, with the groom's right hand on the shoulder, and every step a prayer is said for a special blessing: for food, for strength, for wealth, for wisdom and happiness, for children, for good health, and for friendship. ...read more.

People should make up their own minds about issues of life and death Do you agree? Most Hindus believe that, a Hindu who is very old or very ill may decide for them that the right time has come for death by choosing to stop eating or drinking. This act of renouncing the world shows that the Hindu realises that the world is not as important as it appears. This method of choosing death is often admired as a sign of great holiness. The suicide of people who take their own lives because they are depressed or feel hopeless is not acceptable to Hindus, unless they took their lives as self-sacrifice or because they cannot live without someone who has just died. This is approved by most Hindus Suttee, sometimes spelt as Sati. This is an example kind of suicide. It was believed that death would earn people great karma and so bring about good fortune in the next life. Some Hindus are arguing against this prophecy. I agree that people should make up their own minds about the issues of life and death because of the above. We were put in the world for a reason I agree that we were put in the world for a reason because I believe that we here to work for the God and to have a good karma so that I can have a good soul to be rebirth. Most Hindus believe that they work out of the karma from previous lives because they were put here by some other agencies. And that the humanity as a whole rather than individuals, is because of the will of God. They believe that the reward for the good karma in your whole life would be the rebirth and reincarnation. But some Hindus think that they were here because of pure chance. Some Christians believe also that they were here by chance as the result of natural selection, and that there is no reason, and no-one who put them here. ...read more.

"He is God, hidden in all beings, their inmost soul who is in all. He watches the works of creation, lives in all things, watches all things." This is said by the holy book of Svetasvatara Upanishad. Hindu beliefs about the use of animals in medical research Unlike many other religious believers, most Hindus do not believe that people are much more important than other kinds of animals. Hindu beliefs include the respect for all the living things and recognition of how all the different elements of nature work together to form a whole. Some animals are frequently used in Hindu images of the deities, as an aid to worship. For example, the bull is associated with the goddess Durga, the monkey with Hanuman and the elephant with Ganesha. The cow is especially important in Hinduism because it is a sacred animal. Animals are treated with great care and respect, and many Hindus will not eat meat or meat products because of their respect for animals. The Hindu principle of Ahimsa involves doing no harm to other living creatures. Hurting or destroying animal life leads to bad karma, and the person who has done the damage can expect that, in the future, something similar will happen to them. For all of these reasons, most Hindus are opposed to any kind of cruelty to animals unnecessarily in experiments is completely against Hindu teaching. However, some Hindus do accept that there are times when experiments on animals are essential for human health, and therefore some might agree that when necessary animals could be used for medical research. In India, medical research involving animals does take place, but not on the same scale as in the West. Many people are without even the most basic healthcare, and the question of testing medicine and other procedures on animals does not arise except in the largest cities. People cannot afford to buy any medicines of any kind, whether they have been tested on animals or not. ?? ?? ?? ?? Jonathan Dushyanthan 10P ...read more.