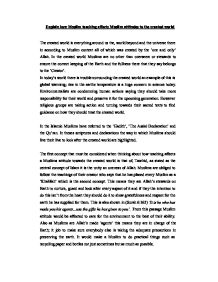 Explain how Muslim teaching affects Muslim attitudes to the created world The created world is everything around us the, world beyond and the universe there in according to Muslim context all of which was created by the 'one and only' Allah. In the created world Muslims are no other than overseers or stewards to ensure the correct keeping of the Earth and the fullness there that they say belongs to the 'Creator'. In today's world there is trouble surrounding the created world an example of this is global warming; rise in the earths temperature is a huge concern in science today. Environmentalists are condemning human actions saying they should take more responsibility for their world and preserve it for the upcoming generation. However religious groups are taking action and turning towards their sacred texts to find guidance on how they should treat the created world. In the Islamic Muslims have referred to the 'Hadith', 'The Assisi Declaration' and the Qu'ran. In theses scriptures and declarations the way in which Muslims should live their live to look after the created world are highlighted. The first concept that must be considered when thinking about how teaching affects a Muslims attitude towards the created world is that of, Tawhid, as stated as the central concept of Islam it is the unity an oneness of Allah. ...read more.

In Islam it is believed that balance is important to Muslims survival and it doesn't matter that Allah created people with independence and freedom it is their duty to prevent ruin and damage to the Earths resources. This is shown in (Surah 55:7) 'Allah has lifted the heavens up high and has set up the balance'. This would affect a Muslim attitude towards the created world in the sense that they feel that its their responsibility keep the balance set by Allah in his world. Practical things that this may cause a Muslim to do would be to protest against animal testing which is deemed cruel and another thing is to campaign to make household recycling compulsory. In Islam it is believed that Human activity is what is damaging the Worlds atmosphere. An example of this is CFC gases. They are warming up the earth and slowly destroying the ozone layer. This is why now a majority of Muslims have are campaigning against the companies who produce and sell this gas and they have also boycotted substances containing CFC gases. This movement in Islam is supported by the Hadith 'Live in this earth as if you were going to live forever' This advises Muslims to think long term and opens there eyes to what would be left of the Earth if they continue how they had been doing. ...read more.

This would cause a Muslim to work together with other communities and religions knowing that they aren't alone. Muslims can gather with their locals and do things like cleaning a lake or litter gathering. Muslims have also formed charities as a response to the created world such as the IFEES which main aims are too educate and train others on environmental issues. Taken from their website here are the main aims: * Research programmes based on Islamic perspectives. * Short, medium and long term courses. * Workshops and training programmes. * Conferences and seminars. * Training and activities in land resource management. * Research and development into new technology. Therefore to conclude I believe that Muslims feel that were assigned as stewards on earth and to protect and guard Allah's creations and therefore are not bound to things on this earth. They believe that if they stay detached worldly goods and items than when judgement day comes they would be favoured greatly in return by Allah and would as Earth was their test they would pass an enter after life. Therefore Muslims would try to keep the world perfect and safe like how it was when created by Allah and making it as good as possibly for future generation. They would live as if they were to live forever. ?? ?? ?? ?? ...read more.