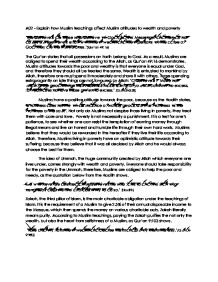 A02 - Explain how Muslim teachings affect Muslim attitudes to wealth and poverty 'The believers are those who believe in God and his Messenger and then do not doubt, but exert every effort with their wealth and their persons in the cause of God. They are the truthful ones.'(Qur'an 49:16) The Qur'an states that all possessions on Earth belong to God. As a result, Muslims are obliged to spend their wealth according to the Allah, as Qur'an 49:16 demonstrates. Muslim attitudes towards the poor and wealthy is that everyone is equal under God, and therefore they should all be treated the same. Wealth is entrusted to mankind by Allah, therefore one must spend it moderately and share it with others. Those spending extravagantly on idle things are not favoured by Allah: 'O believers! ...read more.

The idea of Ummah, the huge community created by Allah which everyone one lives under, comes strongly with wealth and poverty. Everyone should take responsibility for the poverty in the Ummah, therefore, Muslims are obliged to help the poor and needy, as the quotation below from the Hadith shows. 'He will never be deemed a true believer, he who fails to aid his starving neighbor, despite his affordability to do so.' (Hadith) Zakah, the third pillar of Islam, is the main charitable obligation under the teachings of Islam. It is the requirement of a Muslim to give 2.5% of their annual disposable income to the Mosque, which then spends the money on various charitable acts. Zakah literally means purity. According to Muslim teachings, paying the Zakah purifies the not only the wealth, but also the heart from selfishness of a Muslim, as Qur'an 9:103 shows. ...read more.

"Those who spend their wealth in the way of God are like a grain of corn that grows seven ears, in every ear one hundred grains. And God increases further for whomever he pleases."(Quran 2:262) Muslims believe that life itself is a test from God. For those who live in poverty, suffering and pain is believed to be the test of their faith from Allah. For others, wealth is a gift from God. It is also test from Allah to see whether one could overcome the greed and desire for wealth and spend it according to the will of Allah. Everyone is equal in the Ummah under God. Wealth and poverty are just two different paths that Allah has chosen for a Muslim. Muslim's attitude is to follow whatever path Allah has chosen for them without any questioning, as Allah is the ultimate authority and his choices are always the right ones. ...read more.