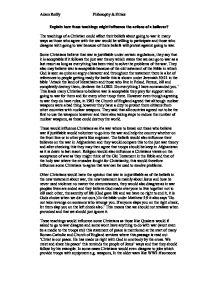 Explain how these teachings might influence the actions of a believer?

Explain how these teachings might influence the actions of a believer? The teachings of a Christian could affect their beliefs about going to war in many ways as those who agree with the war would be willing to participate and those who disagree with going to war because of there beliefs will protest against going to war. Some Christians believe that war is justifiable under certain regulations, they say that it is acceptable if it follows the just war theory which states that we can go to war as a last resort as long as everything has been tried to solve the problems of the war. They also may believe war is acceptable because of the old testament of the Bible in which God is seen as quite an angry character and throughout the testament there is a lot of references to people getting ready for battle this is shown under Jeremiah 50:21 in the bible 'Attack the land of Merathaim and those who live in Pekod. ...read more.

Religion would also influence a Christians views on the acceptance of war as they might think of the Old Testament in the Bible and that of the holy war where the crusades fought for Christianity, this would therefore influence some Christians to agree that war can be used to resolve problems. Other Christians would have the opinion that war is unjustifiable as of the beliefs in the new testament about war, the new testament is mainly about Jesus and how he never used violence no matter the circumstances, they would also disagree as in war peoples lives are ended and they believe God made everyone to live together not to kill each other, the sanctity of life (God gave life and we have no right to end it, it is Gods choice when we die not ours.) In the bible under Matthew 5:9 it also says 'Do not take revenge on someone who wrongs you. If anyone slaps you on the right cheek, let them slap you on the left cheek also.' ...read more.

made to go to war like the protests of famous Christians like Martin Luther King who made a massive impact on the world when he fought for black rights without the use of violence and was successful. This shows that anything is possible and that problems can be solved without the use of violence, many Christians choose to follow in his footsteps and disagree to any violence. To conclude Christians have contrasting views on war and different influences depending on which part of the Bible they believe with Quakers and pacifists disagreeing to war because of the New Testament and Jesus' beliefs of not using violence and other Christians agreeing down to things like the just war theory and Old Testament and Gods character in the Old Testament. All Christians agree with praying however when war and violence starts they pray for peace, they pray for the conflict to end and they also pray for the lives of others and hope that not a lot of lives are ended in the war. ?? ?? ?? ?? Adam Reilly Philosophy & Ethics ...read more.