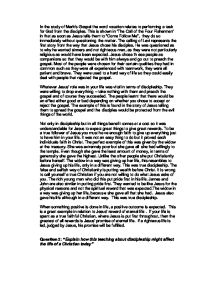 In the study of Mark's Gospel the word vocation relates to performing a task for God from the disciples. This is shown in 'The Call of the Four Fishermen' in that as soon as Jesus tells them to "Come Follow Me", they do so immediately without questioning the matter. The calling of Levi represents the first story from the way that Jesus chose his disciples. He was questioned as to why he wanted sinners and not righteous men, as they were not particularly religious as would have been expected. Jesus chose these people as companions so that they would be with him always and go out to preach the gospel. Most of the people were chosen for their certain qualities they had in common such as they were all experienced with teamwork, they were all patient and brave. They were used to a hard way of life so they could easily deal with people that rejected the gospel. Whatever Jesus' role was in your life was vital in terms of discipleship. They were willing to drop everything - take nothing with them and preach the gospel and of course they succeeded. The people learnt that there would be an effect either good or bad depending on whether you chose to accept or reject the gospel. The example of this is found in the story of Jesus telling them to spread the gospel and the disciples would be protected from the evil things of the world. ...read more.

Others can pass on the good news by word of mouth as they go about their daily lives. Yet others devote their lives to God as missionaries working in different parts of the world building facilities and communities in order to enable people to survive the struggles of life. Christians believe it is right to put the needs of other people before their own. Some such as Mother Teresa lived amongst the poorest of the poor, trying to bring them some comfort and to help them feel God's love for them. Mother Teresa showed the power of her faith by her choice to give up all her possessions, family and friends in order to the poor and needy. She showed her love for God as she served those others may have turned away from. She practiced the commandment which Jesus gave to "love thy neighbour as thyself". This was the love of God in action. Today, however, it can be difficult to live up to the standards of the Christian ideal. Marriage is becoming increasingly less common and motherhood is devalued. Youth are under pressure to follow their peers. However, the Christian way is also one of repentance and forgiveness Modern day Christians are still being persecuted and sometimes killed for their beliefs, just as the twelve apostles were in the early Christian church. ...read more.

They can find it hard to cope with peer pressure. However, it can be possible to be a disciple of Jesus in today's world. It is important for the Christian to have a clear understanding of the teachings of Jesus in order to be able to put them into practice each day. Jesus has asked those who are prepared to follow him to give up the things of the world. This does not mean they leave living in the world and lead a hermit like existence. It means living a Christian life in the modern world. Jesus has asked those who wish to be disciples to put others first. Christians can treat others as they would like to be treated. This can be done at work or school. In Mark's Gospel it tells us that Christians can expect to suffer for their beliefs and this means that they may have to put up with hard times in their day to day living. Jesus has asked that believers should follow his teachings as closely as possible. He extended the invitation "follow me" to all people. In conclusion, it is possible to live in today's world as a disciple of Jesus. A Christian who believes in Jesus, who has faith in him and in his teachings, who models their life on Jesus will be able to cope with the pressures of modern day living. Such a disciple knows that one day he will be rewarded for the challenges of discipleship by having the opportunity of eternal life. ...read more.