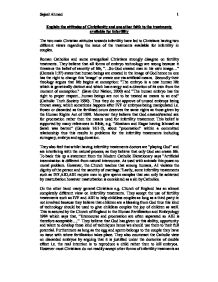 Explain the attitudes of Christianity and one other faith to the treatments available for infertility The two main Christian attitudes towards infertility have led to Christians having two different views regarding the issue of the treatments available for infertility in couples. Roman Catholics and some evangelical Christians strongly disagree on fertility treatments. They believe that all forms of embryo technology are wrong because it threatens the belief of sanctity of life, "...So God created man in his own image..." (Genesis 1:27) states that human beings are created in the image of God hence no one has the right to change this 'image' or create one via artificial means. Secondly their theology argues that life begins at conception: "The embryo is a new human life which is genetically distinct and which has energy and a direction of its own from the moment of conception." (Save Our Nation, 2000) and "The human embryo has the right to proper respect...human beings are not to be treated as means to an end" (Catholic Truth Society 1990). ...read more.

On the other hand many general Christians e.g. Church of England has an almost completely different view on infertility treatments. They accept the use of fertility treatements such as IVF and AIH to help childless couples as long as a third party is not involved because they believe that children are a blessing from God thus this kind of technology should be used to give childless couples the joy of children as well. This is assured by the Church of England in the Human Fertilization and Embryology 1984 which says that, "Intercourse and procreation are often separated so AIH is therefore acceptable...." They believe that God has given us this ability, opportunity and talent to develop these kind of techniques hence we should use them to their full potential. Furthermore as long as the egg and sperm belongs to the couple they have no issue with where fertilisation takes place. They also counteract the Catholic view on discarded embryos by arguing that it is justified under the doctorine of double effect i.e. the real intention is to reproduce a child rather then to kill embryos. ...read more.

the intention is to produce/create a child rather then to kill embryos. However Muslims do not allow any othe form of infertility treatements except IVF and AIH mainly because they believe it is a form of adoption which is not allowed in Islam. Moreover conception that is achieved by a donor ,e.g. in AID, is classified as adultery, which is a great sin, "Nor come close to adultery, for it is a shameful deed and an evil opening the road to other evils" (Qur'an 17 :32). They also deny the right of children to know their natural/biological parents. Lastly, they believe that the child born as a result of surrogacy belongs to the mother as this is what the Shari'ah i.e. Quranic law teaches. Overall I can say that both religions i.e. Islam and Christianity have a range/variety of attitudes to infertility treatements. Where Muslims have a certain attitude to infertility treatements i.e. allow no treatement except IVF and AIH, the attitude among Christians vary. Roman Catholics are strongly against the use of infertility treatements while other general Christians such as Church of England allow it, believing children are a blessing. Sajeel Ahmed 1 ...read more.