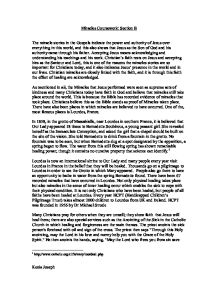 Miracles Coursework: Section B The miracle stories in the Gospels indicate the power and authority of Jesus over everything in this world, and this also shows that Jesus as the Son of God and his authority came through his father. Accepting Jesus means acknowledging and understanding his teachings and his work. Christian's faith rests on Jesus and accepting him as the Saviour and Lord, this is one of the reasons the miracles stories are so important for Christians today, and it also indicates Jesus' presence in the world and in our lives. Christian miracles are closely linked with the faith, and it is through this faith the effect of healing are acknowledged. As mentioned in aii, the Miracles that Jesus performed were seen as supreme acts of kindness and many Christians today have faith in God and believe that miracles still take place around the world. This is because the Bible has recorded evidence of miracles that took place. Christians believe this as the Bible stands as proof of Miracles taken place. There have also been places in which miracles are believed to have occurred. ...read more.

The priest anoints the sick person's forehead with oil and sign of the cross. The priest then says "Through this Holy anointing, may the Lord in his love and mercy help you with the Grace of the Holy Spirit." He then anoints the hands, saying, "May the Lord who frees you from sin save you and raise you up."2 The Sacrament of the sick gives strength to those who are seriously sick and give hope and moral support to families. At the Pentecost the power of healing was given, as one of the gifts of the Holy Sprit to the disciples. The power of healing as Jesus performed in his time has been transferred or delegated to those who believe in him and gifted, this shows that Jesus is alive and present in this world and is working through those chosen. Maria Esparenza was on November 22, 1928. She is a healer and a prophet who has claimed to have visions on the Virgin Mary several times among other phenomenons. She had her first mystical experience at the age of five with the apparition of Saint Theresa of the Little Lower, who from the waters of the Orinoco River tossed her a red rose. ...read more.

On September 20, 1918, Padre Pio had his first occurrence of stigmata while kneeling before a cross. This happened for fifty until the end of his life. The blood flowing from the stigmata is said to have smelled of perfume or flowers. From looking at these different examples of people who believe they have the power of healing it is clear that the miracles of Jesus are important to Christians today as they only have to look at these examples to know that God is still performing miracles through other people. Also from looking at the Sacrament of the Sick, Christians believe that the person will be healed by God as others were healed in the past. In the Sacrament the Priest lays his hands on the sick person and this is similar to what Jesus did when healing a person, he would put his hands on them. The purpose of Jesus' miracles is to let people know of the power of God and that Jesus is the Messiah, this is still believed by Christians today as the examples above show. 1 http://www.catholic.org/clife/mary/lourdes1.php 2 http://en.wikipedia.org/wiki/Anointing_of_the_Sick#Roman_Catholic_Church 3 http://www.crystalinks.com/maria.html ?? ?? ?? ?? Kezia Joseph ...read more.