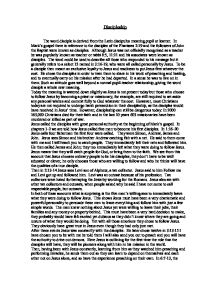 Explain the meaning of discipleship.

Discipleship The word disciple is derived from the Latin discipulus meaning pupil or learner. In Mark's gospel there is reference to the disciples of the Pharisees 2:19 and the followers of John the Baptist were known as disciples. Although Jesus was not officially recognised as a teacher he was popularly known as teacher or rabbi 8:5, 11:21 and his associates were known as disciples. The word could be used to describe all those who responded to his message but it generally refers to a select 12 named in 3:16-19, who were all called personally by Jesus. To be a disciple then meant an exclusive loyalty to Jesus and readiness to put Jesus first whatever the cost. He chose the disciples in order to train them to share in his work of preaching and healing, and to eventually carry on his mission after he had departed. In a sense he was to live on in them. Such an attitude goes well beyond a normal pupil-teacher relationship, giving the word disciple a whole new meaning. Today the meaning is watered down slightly as Jesus is not present today but those who choose to follow Jesus by becoming a priest or missionary, for example, are still required to set aside any personal wishes and commit fully to God whatever the cost. ...read more.

In 6:7-13, the mission of the twelve he gave the disciples several instructions and gave them authority over evil spirits. He set them three tasks: first, to preach that people should turn away from their sins and repent, secondly, to anoint the sick to heal them and thirdly, to cast out evil spirits. By doing this they would be carrying on the work of Jesus. We have seen that he preached repentance in 1:15 the kingdom of God is near! Turn away from your sins. Again he is outlining the job which disciples should do; we begin to see the disciples as the beginnings of the Christian church, outlining the mission of its members. In 8:34-38 Jesus clearly outlines the cost of discipleship. If anyone wants to come with me he must forget self, carry his cross and follow me. When Jesus says forget self he means that to follow him one should put oneself last in everything, to not care about ones status and to not want privileges except being accepted by God into his kingdom. When he says carry his cross he is saying that his disciples must be prepared to follow Jesus even when it means persecution to the point of death. Later on we see that many of the disciples eventually die for their faith. ...read more.

In the Roman Catholic Church priests are required to remain celibate and ministers of other churches choose to be celibate, as it is believed that celibacy allows a person to become devoted fully to God. Mother Theresa was an example of a modern day disciple, she was a Roman Catholic nun who, whilst serving as the principal of a convent in Calcutta was moved by presence of the sick and dying in the city. She left her post at the high school to begin a ministry among the sick. She then extended her work world-wide and in recognition of her efforts she received the Nobel peace prize in 1979. This was a woman who devoted her whole life to God first taking the three vows of poverty, chastity, and obedience as a nun and then in addition took a vow pledging service to the poor, whom she described as the embodiment of Christ. She showed the qualities of a true disciple by putting others needs before her own and living herself in poverty to save others, healing and preaching. She served others and was generous until she could do no more. It was only her ill health that stopped her doing so much and even then she took some time to help others. There are many others who also devote their lives to serving the poor and needy in third world countries, showing the qualities of the disciples by healing and spreading God's message. ...read more.