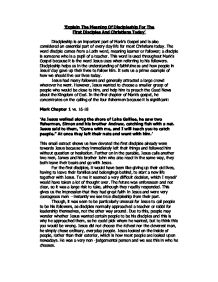 'Explain The Meaning Of Discipleship For The First Disciples And Christians Today'.

'Explain The Meaning Of Discipleship For The First Disciples And Christians Today' Discipleship is an important part of Mark's Gospel and is also considered an essential part of every day life for most Christians today. The word disciple comes from a Latin word, meaning learner or follower; a disciple is someone who is a pupil of a teacher. This word is used throughout Mark's Gospel because it is the word Jesus uses when referring to his followers. Discipleship helps us in the understanding of faithfulness and how people in Jesus' day gave up their lives to follow him. It sets us a prime example of how we should live our lives today. Jesus had many followers and generally attracted a large crowd wherever he went. However, Jesus wanted to choose a smaller group of people who would be close to him, and help him to preach the Good News about the Kingdom of God. In the first chapter of Mark's gospel, he concentrates on the calling of the four fishermen because it is significant: Mark Chapter 1 vs. 16-18 'As Jesus walked along the shore of Lake Galilee, he saw two fishermen, Simon and his brother Andrew, catching fish with a net. Jesus said to them, "Come with me, and I will teach you to catch people." At once they left their nets and went with him.' This small extract shows us how devoted the first disciples already were towards Jesus because they immediately left their things and followed him without question or hesitation. Further on in the parable, Jesus calls another two men, James and his brother John who also react in the same way, they both leave their boats and go with Jesus. ...read more.

The main point Jesus tries to get across is to forget self, which is a very crucial part of being a Christian. It is also expected of those who follow the religion and it means to put others before yourself, which means you are putting God before yourself too. To be unselfish is an excellent quality in a person, yet it is very hard to be completely unselfish, especially in today's world and I am sure the disciples would have struggled at the time also. Christians today must try to be as unselfish as possible because it makes them considerate towards others and they are benefiting from it themselves, as they are becoming less dependant on wealth as a security. We see Christians today putting others first by working at missionaries and raising money for charities. Marriage and having children can also be looked upon as being unselfish because they are prepared to make sacrifices to make their partnership work or by holding back ambitions in life to please others. Jesus also tells his disciples to carry their cross and follow him, which was interpreted into knowing that they must suffer in the same way that Jesus did. The disciples had to follow the example, which Jesus set for them; this meant them even being prepared to die for him, as Jesus did himself for others. Some people think the statement means that everyone in life will have a cross to bear, whether it is illness or another way of suffering. There is a period in the Christian religion where people practise self-denial, which is called Lent. ...read more.

For some, money is happiness and they tend to become incredibly selfish, which is the exact opposite of how Jesus taught his disciples to be. The first disciples were educated to forget self, always putting others before themselves. Once again, because they lived so long ago, their way of life has seemed to fizzle out over the years and religion has almost become a chore for some, especially in youngsters. I think this situation is saddening and they should try to be more involved in their religions. Jesus' teachings methods no longer apply for most Christians and have been relaxed to suit the world that we live in. Due to all these factors, most may think that it is not possible to be a true disciple of Jesus at the present time. However, I beg to differ from these thoughts mainly because there are so many modern day disciples, yet people do not know about them. A prime example which most do actually know of is Mother Theresa of Calcutta. She because they lived such a long time ago, it would be extremely difficult for people nowadays to follow exactly what they did in today's world. The first disciples were able to leave their jobs, families and belongings to devote their lives to Jesus, yet for people today it wouldn't be at all practical. Today, religion doesn't take enough priority as it did in Jesus' time because most people tend to be more interested in money and material wealth. To me, this isn't the way you should approach life, it is a very selfish way of behaving, and Jesus taught his disciples to be unselfish and to always put others first - to forget self. ...read more.