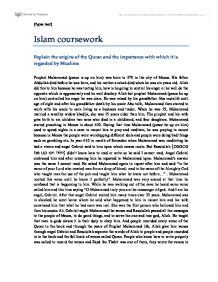 Islam coursework Explain the origins of the Quran and the importance with which it is regarded by Muslims Prophet Muhammad (peace is up on him) was born in 570 in the city of Mecca. His father Abdullah died before he was born, and his mother aminah died when he was six years old. Allah did this to him because he was testing him, how is he going to control his anger or he well do the opposite which is aggressively and he well disobey Allah but prophet Muhammad (peace be up on him) controlled his anger he was clam. He was raised by his grandfather Abu mutallib until age of eight and after his grandfather death by his uncle Abu talib, Muhammad then started to work with his uncle to earn living as a business and trader. When he was 25, Muhammad married a wealthy widow khadija; she was 15 years older than him. The prophet and his wife give birth to six children two sons who died in a childhood, and four daughters. ...read more.

He taught that man is gods slaves it is their duty to obey him. And people recorded every verse of the Quran to the book and through the years of Prophet Muhammad life, Allah give him verses through angel Gabriel and Rasulullah separate the words of Allah to people and people recorded in to the book and the full book of verses called Quran. People who knew how to write properly was called to record the verses and Zayd ibn Thabit was one of them, they wrote the verses in stone or in leaves that Muhammad give it to them and after year's people copied the verses from the stones and the leaves and after prophet Muhammad died Abu bakir and hafiz's made the verses into the book which is called Quran. The Quran, the last revealed Word of God. Quran is written in Arabic and it can be translated into other languages but it wont be fully correct, Arabic is complete language and most of the words in Arabic cannot be translated therefore people should always recite Quran in Arabic. Muslim always performs wudu before touching the Quran. ...read more.

When a Muslim is happy or when they are sad they recite Quran just to thanks Allah or too ask him for help. Muslims send their kids to madrasa to learn Quran while they are young because they believe that it is very important for a Muslim to learn Quran and to follow the rules. They read Quran in their marriages, charities, funerals etc. The importance of Quran is that it is a path to Allah; it is a way to find Allah... and it is such a way that Allah likes us to find him. Muslims believes that Quran is the word of god and it was giving to Prophet Muhammad (peace be up on him). The Qur'an tells us about what happened before and what is yet to come and it is a reference for judging between us. It's the true guide for humanity; it teaches everyone how to lead to a good life, avoiding alcohol so that you can concentrate on Allah, how to respect people. It guides Muslims to give pray, give charity, fasting, and pilgrimage it also teaches the rules of marriages, divorce and also it contains the saying of prophet Muhammad (PBUH). ?? ?? ?? ?? [Type text] ...read more.