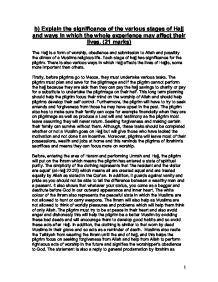 Explain the significance of Hajj.

b) Explain the significance of the various stages of Hajj and ways in which the whole experience may affect their lives. (21 marks) The Hajj is a form of worship, obedience and submission to Allah and possibly the climax of a Muslims religious life. Each stage of hajj has significance for the pilgrim. There is also various ways in which Hajj affects the lives of Hajjis, some more important then others. Firstly, before pilgrims go to Mecca, they must undertake various tasks. The pilgrim must plan and save for the pilgrimage and if the pilgrim cannot perform the hajj because they are sick then they can pay the hajj savings to charity or pay for a substitute to undertake the pilgrimage on their half. This long term planning should help the pilgrim focus their mind on the worship of Allah and should help pilgrims develop their self control. Furthermore, the pilgrim will have to try to seek amends and forgiveness from those he may have upset in the past. The pilgrim also has to make sure their family can cope for example financially when they are on pilgrimage as well as produce a Last will and testimony as the pilgrim most leave assuming they will never return. ...read more.

running seven times between the mountains in search of help and water to quench the thirst of her and her son Isma'il who was dying. This was after Allah had warned Ibrahim that Sarah (wife of Ibrahim) was jealous off Hajar and may harm her and Isma'il. He thus left them in the desert in a place called Bakka as commanded by Allah. However, when Hajar had returned to her son for the final time, Jibril appeared and showed Hajar a spring were Isma'il had scuffed the sand and so Allah saved them. They stayed five nights and on the sixth were found by the Jurhum tribe who were a group of Nomads and welcomed into the tribe. The story reminds Muslims and especially those on pilgrimage that Allah will never abandon them as he didn't abandon Hajar and Isma'il. The run is also said to signify the soul searching for Allah so that its spiritual thirst can be satisfied. The pilgrims express appreciation for the love shown by mothers and this reminds them to show their appreciation and love for their mothers when they return. The pilgrims also pray to God for the same perseverance and Patience shown by Hajar and the re-enactment reminds them to remain patient and persevere in the face of hardships. ...read more.

Furthermore, many pilgrims who have returned from hajj will have changed significantly. Firstly, Hajj may act as catalyst for making life changes as they as long as they are good Muslims in the future than they will go to paradise. Thus pilgrims will return spiritually rejuvenated and with a sense of optimism as Muslims will have completed all five pillars and feel a sense of spiritual fulfillment. The pilgrim may return refreshed after a break from the stresses of life and with a greater perception of Life after experiences during Hajj associated with death which may cause a sense of urgency in making changes such as attending the mosque more often as the theme of death is at the forefront of their mind. In addition, Muslims will be able to advise and pass their new knowledge obtained from hajj to others. Moreover, Hajjis will have developed various positive habits such as avoiding confrontation and encourage them to expand their knowledge base having realised the benefits of learning about the background of hajj in improving their experience of pilgrimage. Finally, Muslims will learn about some of their fellow brothers and sisters across the world and the problems they face, encouraging them to donate to charities such as Muslim aid to help their fellow brothers and sisters in Islam. ?? ?? ?? ?? 1 ...read more.