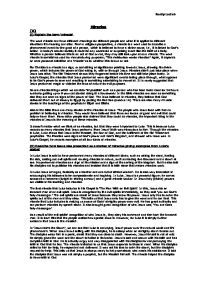 Miracles (A) (i) Explain the term 'miracle' The word miracle can have different meanings for different people and when it is applied to different situations it's meaning can alter. From a religious perspective, a miracle is a word used to describe a phenomenal event for the good of a person, which is believed to have a divine cause, i.e., it is linked to God's action. In today's secular society it could be any wonderful or surprising event like the birth of a baby. Whether a person believes this is an act of God or not, they may still look upon at as a miracle. The word miracle is sometimes used for manufacturing purposes; 'This moisturiser works miracles!' Again, it depends on ones personal definition of a 'miracle' as to whether this is true or not. For Christians a miracle is a sign, or something of significance pointing towards Jesus, showing his divine power, which includes the power of God acting in, with or through Jesus. Miracles didn't just take place when Jesus was alive; The Old Testament shows they happened before his time and still take place today. In Luke's Gospel, the miracles that Jesus performed were significant events taking place through, what appears to be God's power to save and resulting in something astonishing to marvel at. It is rarely suggested that Jesus performed magic or violated the laws of nature for evil purposes. So are miracles things which we consider 'impossible' such as a person who has been brain dead for 24 hours suddenly getting up or if your cat started doing the housework! In the bible miracles are seen as something else they are seen as signs of the power of God. The Jews believed in miracles, they believe that God delivered them out of slavery in Egypt by parting the Red Sea (exodus 14). There are also many miracle stories in the teachings of the prophets in Elijah and Elisha. ...read more.

Jesus was astounded by the mans great faith and when he had healed him, he turned to the crowd and said, "I tell you, I have never found faith like this, not even in Israel." The centurion's faith became part of Jesus' miracle. It was not only the healing which was important but also the fact that the centurion recognised Jesus' healing ability came from God. The miracle helped people to have faith in God and therefore brought them closer to God's kingdom. Another miracle that shows Jesus' power over nature in Luke is when he feeds a crowd of five thousand people. This miracle shows signs of victory over the world. Miracles are not just proof that Jesus is the Son of God; each miracle illustrates different aspects of what it means to be a Christian. This miracle also shows us again the lack of faith of the disciples as they query how they will feed so many people on five loaves and two fish. They do not believe that God will feed his people. The most important reason that Jesus worked miracles was to prove to people that God was coming through him to offer salvation. Some miracles were performed to show the power of God and his kingdom and to give people a taste of what the kingdom of God is really like. These miracles are the direct intervention of God. In them, evil, sickness, and natural phenomena's are all being overcome or harnessed in some way. Jesus was a very powerful individual and Luke wants us to know, from the miracle stories, that there is nothing that Jesus cannot do with the help of God. (iii) Do healing miracles happen today? Today, we have a very different opinion to the Christians of Jesus' time. In Jesus' time, a 'healing miracle' was referred to as when someone has physical, mental, or spiritual problems and is instantly cured of them by something that possesses supernatural abilities. ...read more.

As in Luke 11: 16-20 when Jesus said; "...it is rather by means of God's power that I drive out demons, and this proves that the kingdom of God has already come to you." This story is recorded by three Gospel writers, which shows the great importance it has. Christians still believe that Jesus established God's kingdom and by praying the 'Our Father' they pray for this kingdom to be fulfilled, as Jesus taught his disciples. The great doctor of the church Theresa of Avila once said, "We are Christ in the world to do his work, to fight evil, to heal this broken world, and share in God's creation of his kingdom." Our role is to help fulfil this kingdom of God. We are Christ's body and blood and are sent out to serve him as we are reminded to at the end of every Eucharist. We also have an individual duty to aid healing in the world, through prayer and good works. Groups like HCPT and CAFOD bring healing miracles to life today and can significantly change the lives of many people, just as Jesus did. By doing this they are living what has been taught. Christianity has clearly made a tremendous impact on belief in and meaning of healing and healing miracles. The individuals and groups that have felt driven to dedicate their lives to helping to heal others have transformed lives and contributed greatly to achieving to kingdom of God that Jesus first established. In Jesus' day, the attitude towards miracles was very different to today. When Jesus performed miracles, they were expected and were part of peoples' lives. But now that we have gone through changes in science, religion, etc, we have came to completely forget about miracles as they very rarely happen. The Christian Churches often help people searching for God's help by organising parish pilgrimages and prayer groups for local members of the congregation amongst other things to try and help a group to find the help they need from God. ?? ?? ?? ?? Randip Lochab ...read more.