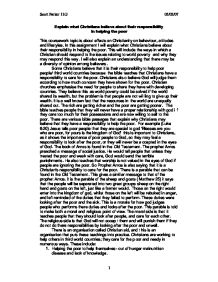 Explain what christians beleive about their responsibilities in helping th poor

Explain what Christians believe about their responsibility In helping the poor This coursework topic is about effects on Christianity on behaviour, attitudes and lifestyles. In this assignment I will explain what Christians believe about their responsibility in helping the poor. This will include the ways in which a Christian should respond to the issues relating to world poverty and why they may respond this way. I will also explain an understanding that there may be a diversity of opinion among believers. Some Christians believe that it is their responsibility to help poor people/ third world countries because the bible teaches that Christians have a responsibility to care for the poor. Christians also believe God will judge them according to how much concern they have shown for the poor. Christian churches emphasise the need for people to share they have with developing countries. They believe this as world poverty could be solved if the world shared its wealth, but the problem is that people are not willing to give up their wealth. It is a well known fact that the resources in the world are unequally shared out. The rich are getting richer and the poor are getting poorer. The bible teaches people that they will never have a proper relationship with god if they care too much for their possessions and are now willing to sell to the poor. There are various bible passages that explain why Christians may believe that they have a responsibility to help the poor. For example (Luke 6:20) Jesus tells poor people that they are special to god 'Blesses are you who are poor, for yours is the kingdom of God' this is important to Christians, as it shows the importance of poor people to God, so they may feel a responsibility to look after the poor, or they will never be accepted in the eyes of God. ...read more.

So Christians may respond to this parable by living their life in the way of this and believing they will be rewarded in heaven. Christians may have wealth, but they may also give some of that wealth into charity to help the poor and struggling in third world countries, so then they will believe that they are being rich towards God. Another example of a parable is the story of the rich man and Lazarus is found in Luke 16:19-31. This parable is a story of a rich man, who had a beggar living outside of his gate, and for years he was ignored by the rich man. When both men died, the rich man was sent to h**l, and the poor person goes to heaven. These were the consequences of ignoring the poor, and the rich man asked God could he warn his brothers of such consequences. But God told them that there had been enough warnings from the prophets. So this parable explains that Christians have been told for centuries that it is wrong to ignore the poor, so they have no excuse to ignore them. So this parable will make Christians think of the consequences and the warnings from prophets. So Christians would respond by paying more attention to the poor and put this teaching into action by helping the poor, or they will suffer the same consequences as the rich man. The last parable I am going to talk about is (Luke 21:1-4) the parable is about the widows offering. There were rich people who put their gifts in the treasury, and lots of Gold coins, this was to make them look good in front of the crowd. He then spotted a widow, putting in two small copper coins into the treasury. Jesus then said that in Gods eyes, she has given to him more than what the rich people had. ...read more.

This parable teaches Christians about the question who is my neighbour? It teaches Christians that our 'neighbour' is anybody that is in need of out help. So modern day Christians will put this into practice as people in third world countries are our neighbour, not just the people at home. So people will believe that it is their duty to love their neighbour, and give them charity, and not be single minded and help the people at home. Christians struggle with a dilemma, they have a belief/ responsibilities to help the poor, but they only have limited resources such as time and money. So they are trying to come up with a solution. Several voluntary agencies joined together to form jubilee 2000 to call for the end of third world debt. In achieving this third world countries will be able to strengthen its self and will no longer need resources that people don't have to give them as the resources they have are limited. The cancellation would make the Christians involved with jubilee 2000 feel as though they had fulfilled their responsibilities for caring for the poor. They can then concentrate on spending their limited resources they have on caring for the neighbours at home, so they have then both cared for people in need close to them and far away from them. I agree with the statement 'charity begins at home' but only to a certain extent. I believe that if it comes down to a choice between helping your own or helping a complete stranger, then you should look after your own. But if the people that you don't know are in greater need of your charity, then you should give it to them rather than just choosing your loved ones. This is because I feel that it is wrong for a person to ignore someone in need simply because he does not know that person, but first of all we should put the people we love first. ?? ?? ?? ?? Scott Parker 11G 05/02/07 1 ...read more.