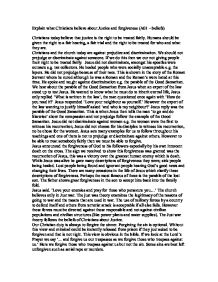 Explain what Christians believe about Justice and forgiveness.

Explain what Christians believe about Justice and forgiveness (A01 - beliefs) Christians today believe that justice is the right to be treated fairly. Humans should be given the right to a fair hearing, a fair trial and the right to be treated for who and what they are. Christians and the church today are against prejudice and discrimination. We should not prejudge or discriminate against someone. If we do this then we our not giving people their right to be treated fairly. Jesus did not discriminate, amongst his apostles were outcasts e.g. tax collectors. He healed people who were socially unacceptable e.g. the lepers. He did not prejudge because of their race. This is shown in the story of the Roman Servant whom he cured although he was a Roman and the Roman's were hated at this time. ...read more.

Jesus did not discriminate against women e.g. the women were the first to witness his resurrection, Jesus did not choose for his disciples to witness his resurrection, no he chose for the women. Jesus sets many examples for us to follow throughout his teachings and one of them is not to prejudge or discriminate against others. However to be able to treat somebody fairly then we must be able to forgive. Jesus announced the forgiveness of God to his followers especially by his own innocent death on the cross. The sign we received to show this forgiveness was granted was the resurrection of Jesus, this was a victory over the greatest human enemy which is death. While Jesus was alive he gave many descriptions of forgiveness they were; sick people being healed. ...read more.

Forgiving the sin is optional. Without this view and criminal could be instantly released from prison if they just asked to be forgiven and that is not right. This view is obvious in the bible. If we look at the Lord's Prayer we say '... and forgive us our trespasses as we forgive those who trespass against us.' Here we forgive those who trespass against us but not the sin. Some sins are best left unforgiven such as serial rape or murders. Christianity teaches the world today that everyone is equal in the eyes of God and so it would be wrong to make anyone feel inferior or suffer because they maybe different in any way. 'There is neither Jew nor Greek, slave nor free, male nor female, for you are all one in Christ Jesus.' Galatians 3:2 Catherine Ling ...read more.