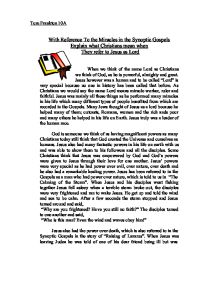 Explain what Christians mean when they refer to Jesus as Lord.

Tom Frankton 10A With Reference To the Miracles in the Synoptic Gospels Explain what Christians mean when They refer to Jesus as Lord When we think of the name Lord as Christians we think of God, as he is powerful, almighty and great. Jesus however was a human and to be called "Lord" is very special because no one in history has been called that before. As Christians we would say the name Lord means miracle worker, ruler and faithful. Jesus was mainly all these things as he performed many miracles in his life which many different types of people benefited from which are recorded in the Gospels. Many Jews thought of Jesus as a lord because he helped many of them; outcasts, Romans, women and the rich ands poor and many others he helped in his life on Earth. Jesus truly was a leader of the human race. God is someone we think of as having magnificent powers as many Christians today still think that God created the Universe and ourselves as humans. ...read more.

As Jesus was a Jew he helped many people of his religion but didn't believe entirely that his religion was right. In Mark's Gospel a man named Jarius who was a leader of a Synagogue in the area confronted Jesus, he said his daughter was dying and needed help, Jesus followed him to his house where his daughter was resting. Jesus sat by the girl and said "you are only sleeping, wake up child". The girl awoke and started walking around the room. If Jesus has the power over death he must be a man that we can call "Lord" as Christians. Jesus helped many other people with his miracle powers, even women which was a strange thing in those times as women were thought of as unequal to men and should not be treated the same. He helped outcasts, the rich and poor and even Romans. The story of Jesus and the woman with the haemorrhage is very important because it shows God's true power. ...read more.

Jesus went to the Roman's house but before he could get there he was confronted by the Centurion, the man said, "Jesus I am not worthy to be in your presence just give the word and my servant will be well. I am also a man of great authority and I am placed above soldiers in my command, I tell my slaves to do this and they do it, I tell one soldier to go their and he does it." Jesus then replied, "I tell you, I have never found faith like this, not even in Israel." Jesus proves to us in this gospel that he does not believe in any form of discrimination and he is a true teacher of the people. When Jews refer to Jesus as Lord I think they are expressing all their ides of him into one important and powerful name. Jesus has proven to be a teacher, a leader, powerful, almighty, a ruler, faithful and a miracle worker. He is truly a man of the people and I think this is the meaning of the name 'Lord' ...read more.