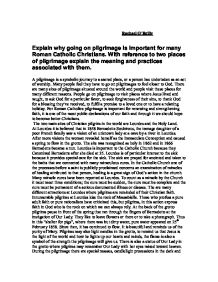 Explain why going on pilgrimage is important for many Roman Catholic Christians. With reference to two places of pilgrimage explain the meaning and practices associated with them.

Rachael O'Reilly Explain why going on pilgrimage is important for many Roman Catholic Christians. With reference to two places of pilgrimage explain the meaning and practices associated with them. A pilgrimage is a symbolic journey to a sacred place, or a person has undertaken as an act of worship. Many people feel they have to go on pilgrimages to feel closer to God. There are many sites of pilgrimage situated around the world and people visit these places for many different reasons. People go on pilgrimage to visit places where Jesus lived and taught, to ask God for a particular favor, to seek forgiveness of their sins, to thank God for a blessing they've received, to fulfil a promise to a loved one or to have a relaxing holiday. For Roman Catholics pilgrimage is important for renewing and strengthening faith, it is one of the most public declarations of our faith and through it we should hope to become better Christians. The two main sites of Christian pilgrim in the world are Lourdes and the Holy Land. At Lourdes it is believed that in 1858 Bernadette Soubirous, the teenage daughter of a poor French family saw a vision of an unknown lady at a cave by a river in Lourdes. After more visions the woman revealed herself as the Immaculate Conception and caused a spring to flow in the grotto. ...read more.

They go to the hillside where Jesus preached the Sermon on the Mount, over looking the Sea of Galilee. Pilgrims can make the journey from Jerusalem to Jericho where Jesus set the parable of the Good Samaritan. Pilgrims are accompanied by guides who select and read appropriate Bible passages, many pilgrims find that to be in the place where the miracles or parables took place often makes the Gospels come alive to them. There are a few places of special significance in the Holy land, one of which is Bethlehem, the birth place of Jesus, the spot in the stable in which Jesus was born is now covered with the Church of the Nativity. This church is shared by many Christian denominations. The Greek Orthodox, Serbian Orthodox, Egyptian Orthodox and Roman Catholic churches all have their own altar served by different priests. Two other churches in Bethlehem stand on the exact location where the Angel Gabriel is said to have appeared to Mary, telling her she would bear God's son. Most pilgrims visit Bethlehem over the Christmas period to take part in all the celebrations associated with the birth of Christ. Jerusalem is a religious center sacred to all three monotheistic religions, Islam, Judaism and Christianity. Religious pilgrims from all nations flood through its gates every year. References to the city of Jerusalem appear throughout the scriptures as Jerusalem has and will continue to play an important part in God's deliverance of the Earth, His Holy city and our involvement in it. ...read more.

Even if people don't need to be physically healed pilgrimage is a way of strengthening their fait. It can also help other to believe in God. Pilgrimages are a good way of saying thank you to God for something he has done for you or to express sorrow for some sins committed. In a metaphorical sense all Christians are pilgrims, their lives are their pilgrimages as they're on a journey to God. They have the prayer and support of other Christians. They have the help and comfort of Jesus and the power and strength of the Holy Spirit. The image of the Church as pilgrims emphasizes that Christians are searching for a better understanding of God. After going on pilgrimage a Christian may have a greater respect for God, and have a greater awareness of his presence, they also may become less agitated and angry, they may aquifer the gifts of the spirit of God; gentleness, peace, patience and kindness. However, some people might say that to become a better Christian you do not have to go on pilgrimage, some might see it as a waste of money and argue that it is through prayer that we become closer to God. Some people may argue that there is no point in travelling across the world to become closer to God. Lots of people do not believe in the healing powers of a pilgrimage and see it as a money making scheme. However, I believe that f given the opportunity all Christians should strengthen their faith and go on a pilgrimage. ...read more.