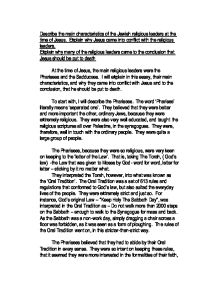 Describe the main characteristics of the Jewish religious leaders at the time of Jesus. Explain why Jesus came into conflict with the religious leaders. Explain why many of the religious leaders came to the conclusion that Jesus should be put to death At the time of Jesus, the main religious leaders were the Pharisees and the Sadducees. I will explain in this essay, their main characteristics, and why they came into conflict with Jesus and to the conclusion, that he should be put to death. To start with, I will describe the Pharisees. The word 'Pharisee' literally means 'separated one'. They believed that they were better and more important the other, ordinary Jews, because they were extremely religious. They were also very well educated, and taught the religious scriptures all over Palestine, in the synagogues. They were, therefore, well in touch with the ordinary people. They were quite a large group of people. The Pharisees, because they were so religious, were very keen on keeping to the 'letter of the Law'. That is, taking The Torah, ( God's law) -the Law that was given to Moses by God- word for word, letter for letter - sticking by it no matter what. They interpreted the Torah, however, into what was known as the 'Oral Tradition'. The Oral Tradition was a set of 613 rules and regulations that conformed to God's law, but also suited the everyday lives of the people. They were extremely strict and just so. For instance, God's original Law - "Keep Holy The Sabbath Day", was interpreted in the Oral Tradition as - Do not walk more than 2000 steps on the Sabbath - enough to walk to the Synagogue for mass and back. As the Sabbath was a non-work day, simply dragging a chair across a floor was forbidden, as it was seen as a form of ploughing. The rules of the Oral Tradition went on, in this stricter-than-strict way. ...read more.

They did not like or trust this Jesus character, and this eventually led to his death. In "The Paralysed Man" MK ch2 v1-12, Jesus was in a house, and a crowd gathered around. The crowd was so big, that when a paralysed man being carried by for people came, they could not get through. So they broke through the roof and lowered him in, to the floor. When Jesus saw how much faith they had, he said to the man "Son, your sins are forgiven" And then of course, the Pharisees, who always managed to be there at these times, said "He is talking blasphemously. No-one can forgive sins except God." Jesus said, "Which is easier to say? - 'Thy sins are forgiven', or 'Rise up, take thy bed with you, and walk'?" Then he told the paralysed man to get up and go home, and he did. The crowd was astonished, and so were the Pharisees. This was one of the first times Jesus and the religious leaders had had some sort of dispute. It was a time when the Pharisees realised that Jesus was too clever for them, and had embarrassed them in front of the crowd. They began to resent Jesus. Throughout his childhood and as a young man, Jesus led an ordinary life. At the age of thirty, he became a travelling preacher. The Jews thought that Jesus' teaching resembled the Pharisees way of teaching, and so he earned the title 'Pharisaic Rabbi' - that is, a Pharisee-like teacher. Initially, the Pharisees welcomed him. Jesus was a good teacher, and the crowds listened to him. That is, until Jesus started to say things that the Pharisees didn't want to hear. Like 'hypocrites'. In MK ch7 -'Ritually Unclean', The Pharisees ask Jesus why his disciples don't follow their ancestors' teachings, and eat with their hands unwashed. Jesus answers: "You hypocrites. Isaiah's prophecy said: 'These people do me honour with their lips, but their hearts are far from me' Moses said- 'Honour thy father and mother. ...read more.

Maybe if they could have seen how important Jesus would be 2000 years later, they might have thought twice about their actions. But how were they to know? Were they ignorant not to believe Jesus was the Messiah? Would you have believed it? Jesus was indeed a powerful man. After all he was God, but the Pharisees and Sadducees couldn't see that, because they were so wrapped up in their own well-beings, and their must-keep Laws. He preached and people listened. He contradicted Jewish beliefs and people listened. And he knew a lot about the Old Testament. From the Sanhedrin's point of view, it was vital that Jesus be disposed of to protect their own interests and their own authority. But they failed to see what Jesus had been put on earth to do. He had never set out to overthrow anyone, or humiliate anyone. Jesus was the Messiah. They did not understand Isaiah's prophesy of 'The Suffering Servant' - that the Messiah was going to suffer for the good of the people, and be a servant to them. Jesus was a man of peace, not a warrior king. Not a King David. He never encouraged people to think he was special, or more worthy than anyone else. He didn't ask people to worship him. Many times, Jesus asked his disciples not to tell anyone what they had seen him do - miracles etc - or to tell anyone that he was the Son of God. And yet people loved him. Thousands of people came from all over just to hear him speak. Jesus was so gentle, yet the Pharisees and the Sadducees were actually worried there would be a revolution amongst the people, that they would be overthrown as the Jewish Council. How could a man who was so kind and peaceful be capable of doing so much harm to the religious leaders? Why was he so powerful? Surely, they must have seen that Jesus was no ordinary man who simply disagreed with their teachings? This was why they killed him. ...read more.