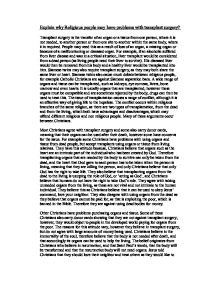 Explain why Religious people may have problems with transplant surgery?

Explain why Religious people may have problems with transplant surgery? Transplant surgery is the transfer of an organ or a tissue from one person, where it is not needed, to another person or from one site to another within the same body, where it is required. People may need this as a result of loss of an organ, a missing organ or because of a malfunctioning or diseased organ. For example, if an alcoholic suffered from liver disease and was in a critical situation, liver transplant would be considered from a dead person (as living people need their liver to survive). His diseased liver would then be removed from his body and a healthy liver would be transplanted into him. Siamese twins may also require transplant surgery, as they may both share the same liver or heart. Siamese twins also cause much debate between religious people, for example Catholic Christians are against Siamese separation bans. A wide range of organs and tissue can be transplanted, such as kidneys, eye corneas, livers, bone marrow and even hearts. It is usually organs that are transplanted; however these organs must be compatible and are sometimes rejected by the body, drugs can then be used to treat this. The issue of transplantation causes a range of conflict, although it is an effective way of giving life to the hopeless. The conflict occurs within religious branches of the same religion, as there are two types of transplantation, from the dead and from the living, which both have advantages and disadvantages, which may offend different religious and non religious people. ...read more.

dead, for example heart transplants require the heart to be removed before it has stopped beating, therefore it is extracted while the donor is still living. Emotional and moral problems also arise, the main problem being will the surgeons who have a desperate patient for a transplant work to the best of their ability to save the life of the potential donor? It also diverts research and resources from prevention or less expensive cures which could improve the lives of many more people than a transplant surgery, which requires money and donors. A trade is caused between the people in the developed and less developed world, where organs may be bought and sold at extremely low prices, which does not support the fair trade rights, where people earn a fair price for items sold. Christianity is not the only religion that has conflict between different branches of the religion, Islam and Judaism are also involved in the argument. Muslims also have problems with transplant surgery, as they believe this is against God's will. Accordingly most Muslims are opposed to transplant surgery and will not carry donor cards. They have this attitude because, the Shari'ah teaches that nothing should be removed form the body after death and also opposes post-mortems Consequently organs should not be removed after death. Therefore most Muslims disagree with transplant surgery using organs from the dead. The Qur'an also says that God has created the body of a person, and so to take parts from one body and insert them into another is to act as God, which is the greatest sin in Islam, called shirk. ...read more.

Some of these will also not carry donor cards. A main difference is that only Christianity has a group within the religion that allows transplant surgery using organs dead people, where some of these Christians also carry donor cards. Some Christians also believe that the body is not needed after death, however Muslims believe that it is needed and also opposes post-mortems. Islam is also more social, as lawyers and councils are used to decide on whether something is permissible, for example the ruling fatwa issued by the Muslim Law Council in 1195 decided that Muslims could carry donor cards and have transplants form close living relatives. Christians allow transplant surgery from close living donors as it obeys Jesus' command, love thy neighbor. Jews allow transplant surgery only from a close living relative as they belief this may affect a Jews origination, as the Jewishness is passed on through the blood of the mother. Islam's main reason for only allowing transplant surgery when the organs or tissue used a from a close living relative is because Islam is a religion that seeks to do good, and can change according to a persons circumstances, for example if a Muslim is starving to death pork may be eaten. Overall all of the religions have similar beliefs, apart from Christianity which has an extra group within the religion allowing transplant surgery. The similarities are based upon different thoughts, however they all belief that transplant surgery form dead people is against God's will and usurping the role of God. ...read more.