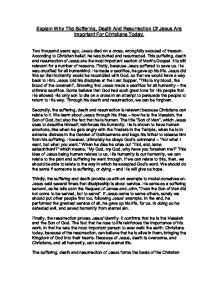 Explain Why The Suffering, Death And Resurrection Of Jesus Are Important For Christians Today

Explain Why The Suffering, Death And Resurrection Of Jesus Are Important For Christians Today. Two thousand years ago, Jesus died on a cross, wrongfully accused of treason. According to Christian belief, he was buried and resurrected. This suffering, death and resurrection of Jesus are the most important section of Mark's Gospel. It is still relevant for a number of reasons. Firstly, because Jesus suffered to save us. He was crucified for all humankind. He made a sacrifice, he gave up his life. Jesus did this so that humanity would be reconciled with God, so that we would have a way back to Him. Jesus told his disciples at the Last Supper, "This is my blood, the blood of the covenant", Showing that Jesus made a sacrifice for all humanity - the ultimate sacrifice. ...read more.

However, ultimately he obeys God's command - "Not what I want, but what you want." When he dies he cries out "Eloi, eloi, lema sabachthani?" which means, "My God, my God, why have you forsaken me?" This idea of Jesus being human relates to us. His humanity is our humanity, we can relate to the pain and suffering he went through. If we can relate to this, then, we should be able to relate to the way in which he accepted God's word. We should do the same if someone is suffering, or dying - and He will give us hope. Thirdly, the suffering and death provide us with an example to model ourselves on. Jesus said several times that discipleship is about service. ...read more.

The suffering, death and resurrection of Jesus forms the basis of the Christian religion. It is the most integral part of Christianity. He sets an example for the whole human race and his pain and suffering relates people to him. Christianity is based on belief in the resurrection. St. Paul states this well in his first letter to the Corinthians. "If there be no resurrection, then Christ was not raised; and if Christ was not raised, then our Gospel is null and void, and so is your faith." Jesus' teaching is so powerful, He made us believe and understand what happened in his life and without the resurrection none of this would have been possible. Jesus can now be alive within us, and working in our hearts. As Jesus himself said, his last words in Matthew's Gospel: "I am with you always, to the very end of the age." ...read more.