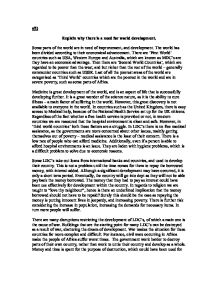 Explain why there is a need for world development

aii) Explain why there is a need for world development. Some parts of the world are in need of improvement, and development. The world has been divided according to their economical advancement. There are 'First World' countries such as USA, Western Europe and Australia, which are known as MDC's are they have an economic advantage. Then there are 'Second World Countries', which are regarded to be poorer than the west, and but richer than the rest of the world - generally communist countries such as USSR. Last of all the poorest areas of the world are categorised as 'Third World' countries which are the poorest in the world and are in severe poverty, such as some parts of Africa. Medicine is great development of the world, and is an aspect of life that is successfully developing further. ...read more.

They are laden with hygiene problems, which is a difficult problem to solve due to economic reasons. Some LDC's take out loans from international banks and countries, and used to develop their country. This is not a problem until the time comes for them to repay the borrowed money, with interest added. Although a significant development may have occurred, it is only a short term period. Eventually, the country will go into dept as they will not be able pay back the money borrowed. The money that they had to pay as interest could have been use effectively for development within the country. In regards to religion we are taught to "love thy neighbour", hence is there an underlined implication that the money borrowed should not have to be repaid? Surely this should be the case as repaying the money is putting innocent lives in jeopardy, and increasing poverty. ...read more.

Nevertheless, not all problems that contribute to the lack of development in LDC's are due to mankind. There are many frequent natural causes occurring in LDC's that cannot be stopped. Earthquakes make the development of schools, government building and hospitals into rubble. These buildings are key to the countries development, which they cannot afford to loose. Furthermore, these natural disasters significantly increase the death rate. This is because; there will be severe shortages of necessities like water and food. Many lives will be affected and no alternative methods for safe water supplies can be made, hence diseases such as typhoid increase within the population; creating more chaos as hospitals are expensive and are inadequate in coping with such situations. The life expectancy in these countries is very low. Lack of development in the world should be of concern to us, as we have the means to help them. The cash crops they are growing are of necessities, and so in return we should provide them with their lack of necessities. ...read more.