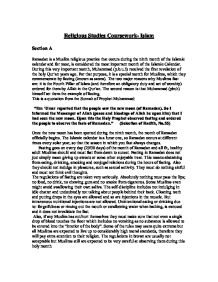 Fasting goes on every day (29/30 days) of the month of Ramadan and all fit, healthy adult Muslims should and must fast from dawn to sunset.

Religious Studies Coursework- Islam Section A Ramadan is a Muslim religious practice that occurs during the ninth month of the Islamic calendar and for most, is considered the most important month of the Islamic Calendar. During this very important month, Muhammad (p.b.u.h) received the first revelation of the holy Qur'an years ago. For that purpose, it is a special month for Muslims, which they commemorate by fasting (known as sawm). The two major reasons why Muslims fast are: it is the Fourth Pillar of Islam (and therefore an obligatory duty and act of worship) ordered for them by Allah in the Qur'an. The second reason is that Muhammad (pbuh) himself set them the example of fasting. This is a quotation from the Sunnah of Prophet Muhammad: "Ibn 'Umar reported that the people saw the new moon (of Ramadan). So I informed the Messenger of Allah (peace and blessings of Allah be upon him) that I had seen the new moon. Upon this the Holy Prophet observed fasting and ordered the people to observe the fasts of Ramadan." (Selection of Hadith, No.55) Once the new moon has been spotted during the ninth month, the month of Ramadan officially begins. ...read more.

During the winter, when the nights are long, Suhur is often quite substantial. In the summer, it might have to be eaten only a few hours after concluding the night meal and will therefore be quite light. High energy foods are usually eaten such as: yoghurt, cheese and honey but spicy, salty foods are avoided because they make people more thirsty. Although no food is eaten during the day, most women still have to prepare food for the night for the rest of the family. They usually cook their favourite foods to celebrate the occasion. When the fast draws to its close, all Muslims feel excited and are proud of their endurance. They usually have a timetable sheet which is given for the month of Ramadan by their local mosque that states the IFTAR time. This is during sunset. They break their fast with iftar (breakfast), each day with some sweet dates or a glass of water. Muhammad (pbuh) used to break the fast each day with a few dates or a drink and most Muslims follow this tradition because of the Sunnah, the example of Muhammad (pbuh), but also because, they are regarded as highly nutritious and are symbolic of ancient times. ...read more.

It consists of 20 raka'hs but people can read 8 raka'hs if they wish to when they are tired. During this, a whole section of the Qur'an ('Juz', which is 1/30 of the Qur'an) is recited each day, so that by the end of the month the entire Qur'an has been completed. It is a Sunnah prayer in which efforts are made by the Imam in the mosque during prayer or Muslims at home, to recite the whole Qur'an in 1 month (Ramadan). This is considered as meritorious to recite the whole of the Qur'an in the sacred month. This prayer is usually performed in congregation but those who can't join are expected to read it at home. On the 27th Ramadan, also known as LAILATUL-QADR, the imam usually finishes the Qur'an in the mosque which he started reading on the first Ramadan. After Tarawih, on this day, food is offered to fellow Muslims who have attended mosque to commemorate the first night when Muhammad (p.b.u.h) began to receive revelations of the Qur'an. Only Sunni Muslims tend to perform this recitation of the entire Qur'an of this special prayer (Tarawih). Mosques are filled with worshippers who go to attend these prayers, which usually last for one and a half to two hours. These ?? ?? ?? ?? ...read more.