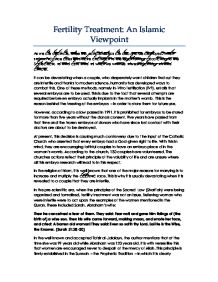 Fertility Treatment: An Islamic Viewpoint As we are all aware, three thousand embryos are about to be destroyed. What significance does this have and what is the legal ruling, according to the Sacred Law, is this act? This is what we will be investigating in this article. It can be devastating when a couple, who desperately want children find out they are infertile and thanks to modern science, humanity has developed ways to combat this. One of these methods, namely In-Vitro fertilisation (IVF), entails that several embryos are to be used. This is due to the fact that several attempts are required before en embryo actually implants in the mother's womb. This is the reason behind the freezing of the embryos - in order to store them for future use. ...read more.

This is why it is usually devastating when it is revealed to a couple that they are infertile. In the pre-scientific era, when the principles of the Sacred Law (Shari'ah) were being organized and formalized, fertility treatment was not an issue. Believing woman who were infertile were to act upon the examples of the women mentioned in the Quran. These included Sarah, Abraham's wife: Then he conceived a fear of them. They said: Fear not! and gave him tidings of (the birth of) a wise son. Then his wife came forward, making moan, and smote her face, and cried: A barren old woman! They said: Even so saith thy Lord. Lo! He is the Wise, the Knower. (Surah 51:28-30) In the well known and accepted Tafsir al-Jalalayn, the author mentions that at the time she was 99 years old while Abraham was 120 years old. ...read more.

AIH and IVF, however, (using the husband's sperm) are permissible since it is not the Science itself which is forbidden, rather the mixing up of lineages. Using this rationale as a basis, Muslims are not opposed the destroying of these embryos since they do not posses life. From this we can conclude that the "spare embryo" scenario is not a problem from the Islamic point of view provided that they are not donated to any other women. The importance of the position of Islam on this issue is of great importance since most personal beliefs with regards to this would reflect his/hers core beliefs, for instance a Muslim who believed in the word of Allah and the tradition of his Prophet SAW would naturally agree with the view I have outlined in previous paragraphs. It is for this reason I hold these very views. (c)2009 Suleiman Bobat ...read more.