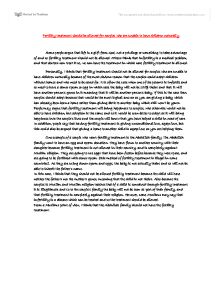 People may argue that fertility treatment will bring happiness to couples, who otherwise would not be able to have children, but adoption is the same and so it would be even better to adopt as it will bring happiness into the couple's lives and the couple will know that you have helped a child in need of care. In addition, people say that having fertility treatment is giving unconditional love, agape love, but this could also be argued that giving a home to another child is agape love as you are helping them. One example of a couple who want fertility treatment is the Abdullah family. ...read more.