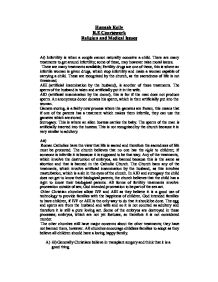 Ai) Infertility is when a couple cannot naturally conceive a child. There are many treatments to get around infertility; some of these, may however raise moral issues.

There are many treatments available; Fertility drugs are one of these, this is where an infertile woman is given drugs, which stop infertility and make a woman capable of carrying a child. These are recognised by the church, as the sacredness of life is not threatened.

AIH (artificial insemination by the husband), is another of these treatments. The sperm of the husband is taken and artificially put it in the wife.

AID (artificial insemination by the donor), this is for if the man does not produce sperm. An anonymous donor donates his sperm, which is then artificially put into the woman.

Gamete storing, is a fairly new process where the gametes are frozen, this means that if one of the parents has a treatment which makes them infertile, they can use the gametes which are stored.

Surrogacy. This is where an alien hostess carries the baby. The sperm of the man is artificially inserted into the hostess. This is not recognised by the church because it is very similar to adultery.

Roman Catholics have the view that life is sacred and therefore the sacredness of life must be protected. The church believes that no one has the right to children; if someone is infertile it is because it is supposed to be that way. Any of the treatments, which involve the destruction of embryos, are banned because this is the same as abortion and that is banned in the Catholic Church. The Church bans any of the treatments, which involve artificial insemination by the husband, as this involves masturbation, which is a sin in the eyes of the church. In AID and surrogacy the child does not get to know their biological parents, the church believes that the child has a right to know their biological parents. All forms of fertility treatments involve procreation outside of sex; God intended procreation to be part of the sex act.

Other Christian churches allow IVF and AIH as they believe it is a good use of technology to provide families with the happiness of children. God intended families to have children, if IVF or AIH is the only way to do that it should be done. The egg and sperm are from the husband and wife and so it is not counted as adultery and therefore it is still a pure loving act. Some of the embryos are destroyed in these processes; embryos, which are not yet foetuses, so therefore it is not considered murder.

The other churches still have major concerns about the other treatments; they have not banned them, however. All churches encourage childless families to adopt as they believe all children should have a loving happy family.

Some Christians have some ethical issues, however. They believe that it would be wrong for rich people to pay for organs. It is well known that some wealthier 1st world citizens would be more than willing to exploit uneducated, 3rd world citizens to save themselves. This is known as the black market. The people in Africa may not be well educated and therefore do not realise that it is dangerous. It could be dangerous as the surgeon in Africa may be using dirty equipment and therefore the African would be vulnerable to infection. It is also exploiting the poor which is condemned by the bible.

Some Christians are opposed to using organs from the dead but support using those of the living. They believe that organs such as the heart are an intrinsic part of the individual created by God. Transplanting organs from the dead into the living is usurping the role of God, and humans do not have the right to play God. This is a sin and is condemned by the Bible. Jesus taught us to love thy neighbour. If an organ can be transplanted while someone is alive then it is not vital and transplanting it would be, ‘loving thy neighbour.’

Some Christians believe all transplant surgery wrong and condemn it. They believe that transplants ignore the sanctity of life. This is a great sin in the eyes of the church. They believe that transplanting organs is ‘playing God’ and this is one of the great sins. They also believe that it is very expensive and requires very skilled people of which there are few. It raises the question of when someone is considered dead, as the heart needs to be removed when it is still beating. It diverts recourses from less expensive treatments which could help far more people than transplants.