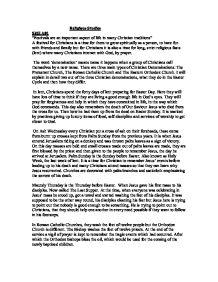 &quot;Festivals are an important aspect of life in many Christian traditions&quot;

Religious Studies Skill A01 "Festivals are an important aspect of life in many Christian traditions" A festival for Christians is a time for them to grow spiritually as a person, to have fun with friends and family but for Christians it is also a time for long, strict religious fasts (lent) where many Christians interact with God, by prayer. The word 'denomination' means name it happens when a group of Christians call themselves by a new name. There are three main types of Christian Denominations: The Protestant Church, The Roman Catholic Church and The Eastern Orthodox Church. I will explain in detail two out of the three Christian denominations, what they do in the Easter Cycle and then how they differ. In lent, Christians spend the forty days of lent preparing for Easter Day. ...read more.

Palm Sunday is the Sunday before Easter. Also known as Holy Week, the last week of lent. It is a time for Christian to remember Jesus' events before leading up to his death and many Christians attend masses so that they can learn why Jesus resurrected. Churches are decorated with palm branches and sackcloth emphasizing the sorrow of his death. Maundy Thursday is the Thursday before Easter. When Jesus gave his first mass to his disciples. Now called The Last Supper. At the time, when everyone was celebrating in Jesus' mass he stood up, got a towel and started washing the feet of his disciples. It was supposed to be the other way round, his disciples cleaning his feet but Jesus here is trying to point out that nobody is good enough to be something. ...read more.

In an Orthodox Church, Good Friday is known as 'Great Friday'. On this service day, the priest places a cloth with an image of Christ in the centre of the church with a flowered coffin, this is a symbol of respect to Jesus and people give them their regards the Holy Spirit. This happened fifty days after the Last Supper. On this day the disciples received the Holy Spirit described as a 'tongue of fire' meaning they could spread the word of God without any fear. Many say this is the day the church really started. It is described as the birthday of the church. Christians also believe that this same Holy Spirit which the disciples received has been past down throughout history by priests and bishops. Known as 'the apostolic succession'. Since we have received the same spirit we too much preach the word of God. ...read more.