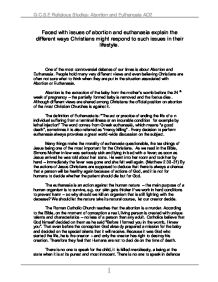 Faced with issues of abortion and euthanasia explain the different ways Christians might respond to such issues in their lifestyle. One of the most controversial debates of our times is about Abortion and Euthanasia. People hold many very different views and even believing Christians are often not sure what to think when they are put in the situation associated with Abortion or Euthanasia. Abortion is the extraction of the baby from the mother's womb before the 24th week of pregnancy - the partially formed baby is removed and the foetus dies. Although different views are shared among Christians the official position on abortion of the most Christian Churches is against it. The definition of Euthanasia is: "The act or practice of ending the life of an individual suffering from a terminal illness or an incurable condition for example by lethal injection" The word comes from Greek euthanasia, which means "a good death", sometimes it is also referred as "mercy killing". ...read more.

We should let the nature take its natural course, let our creator decide. The Roman Catholic Church teaches that the abortion is a murder. According to the Bible, on the moment of conception a real, living person is created with unique talents and characteristics - no less of a person than any adult. Catholics believe that God himself decided on them as he said "Before I formed you in the womb, I knew you". That even before the conception God already prepared a mission for the baby and decided on the special talents that it will receive. Because it was God who started the life, he is the creator - and only the creator has right to destroy his creation. Therefore they feel that Humans are not to decide on the time of death. There is no one to speak for the child, it is killed mercilessly, a being at the state when it is at its purest and most innocent. ...read more.

But who are we to say that life below a certain level of quality is pointless? As a Christians we must remember that every each of us has been given a mission and we should not interfere with God's plans. The decision to kill the baby just because it is unwanted or disabled seems to be even more selfish and immoral if we consider the fact that there are many other alternatives to abortion. One of them would be putting the baby into an orphanage or give it to people who are not able to have babies on their own and who will be extremely happy to be chosen to get one. As a Christians we should believe in the sanctity of life and euthanasia and abortion are one of the most scandalous examples of breaking it - these are the examples of a murder done on an innocent and defenceless people, where the most shocking part of it is that some try to justify it. ?? ?? ?? ?? G.C.S.E Religious Studies: Abortion and Euthanasia AO2 1 ...read more.