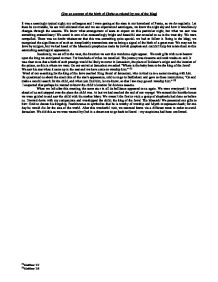 It was a seemingly typical night; my colleagues and I were gazing at the stars in our homeland of Persia, as we do regularly. Let there be no mistake, we are well educated men and we are experienced astrologers, we know the night sky and how it wondrously changes through the seasons. We knew what arrangement of stars to expect on this particular night, but what we saw was something extraordinary! We stood in awe of an outstandingly bright and beautiful star revealed to us in the west sky. We were compelled. There was no doubt whatsoever that this was something quite special- we had to follow it. Being in the Magi, we recognised the significance of such an inexplicably tremendous star as being a signal of the birth of a great man. ...read more.

The journey was tiresome and took weeks on end. It was clear to us that a birth of such prestige would be likely to occur in Jerusalem, the place of Judaism's origin and the location of the palace, so this is where we went. On our arrival at Jerusalem we asked "Where is the baby born to be the king of the Jews? We saw his star when it came up in the east and we have come to worship him." (1) Word of our searching for the king of the Jews reached King Herod of Jerusalem, who invited us to a secret meeting with him. He questioned us about the exact time of the star's appearance, told us to go to Bethlehem and gave us these instructions; "Go and make ...read more.

We entered the humble house we were guided to and saw the child with his mother Mary. We weren't the first to visit; a group of shepherds had done so before us. I bowed down with my companions and worshipped the child; the king of the Jews! The Messiah! We presented our gifts to him: Gold to denote his kingship, Frankincense to symbolize that he is worthy of worship and Myrrh to represent death; for one day he would die for the sins of the world. After this wonderful visit, we returned home via a different route in order to avoid Jerusalem. We did this as we were warned by God in a dream not to go back to Herod - my suspicions had been confirmed. ?? ?? ?? ?? Give an account of the birth of Christ as related by one of the Magi (1)Matthew 2:2 (2)Matthew 2:8 ...read more.