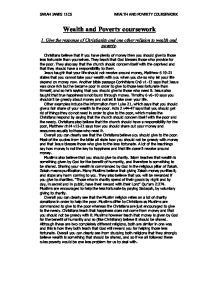 Give the response of Christianity and one other religion to wealth and poverty.

Wealth and Poverty coursework 1. Give the response of Christianity and one other religion to wealth and poverty. Christians believe that if you have plenty of money then you should give to those less fortunate than yourselves. They teach that God blesses those who provide for the poor. They also say that the church should concern itself with the deprived and that they should have a responsibility to them. Jesus taught that your life should not revolve around money, Matthew 6 19-21 states that you cannot take your wealth with you when you die so why let your life depend on money now. Another bible passage Corinthians Cn8 v1-13 says that Jesus was once rich but he became poor in order to give to those less fortunate than himself, and so he's saying that you should give to those who need it. Jesus also taught that true happiness is not found through money. Timothy 6 v6-10 says you shouldn't be greedy about money and not let it take over your life. Other examples include the information from Luke 21, which says that you should give a fair share of your wealth to the poor. Acts 2 v44-47 says that you should get rid of things they do not need in order to give to the poor, which makes the Christians respond by saying that the church should concern itself with the poor and the needy. Christians also believe that the church should have a responsibility for the poor, Matthew ch14 v15-21 says how you should share out your money and resources equally to those who need it. Overall you can clearly see that the Christians believe you should give to the poor. Most of the quotes from the bible all state how you should not be greedy with money and that Jesus blesses those who give to the less fortunate. A lot of the teachings say how money is not the key to happiness and that life doesn't revolve around money. ...read more.

LDC's are providing cash crops in order to pay off their large debts. They are growing things for sale, such as tobacco, tea, cotton etc. Many cash crops are taking place of usual crops and so many people are now starving. This also needs to be developed in order to stop this starvation. Other factors causing world poverty is the lack of education, lack of clean fresh water, disease etc. These factors can change a rich country to a poor county jus over night. Christians around the world would all respond in the same way. They would all be disgusted at the way the money is being shared around the world: with extreme wealth in the north yet extreme poverty in the south. Christians believe that money should be shared equally between everyone, and if you have plenty yourself then you should give to those less fortunate than you. If we were to abide by these rules then the world would be a much better place as the LDC could now become MDC and all the problems of the worlds health, diet and education would also be resolved. Christians also believe that God blesses those who give to the poor so why doesn't the entire rich north do so. 3. Analyse and explain the work of one religious agency (Christian Aid) working for world development. Christian Aid does an awful lot for world development. Their main aims are to relieve poverty, help with emergency aid and long-term aid and to help develop the worlds education. In order for them to relieve poverty they need money, and so a lot of their time goes into fundraising. A nationwide event has now been set up called Christian Aid week which has churches working extremely hard everywhere. They put leaflets about Christian Aid into every house they come to and this has helped them to raise �8.6 million just in 1995. ...read more.

give some of their wealth to those who need it more than they do. However many of the rich do not contribute into giving to those less fortunate at all and so the problems of poverty still occur in many places. There are many extremes in the different approaches towards wealth: Right at the top there is Bill gates giving $100million to charity and other millionaires giving nothing at all at the bottom. Also there is Richard Branson who is doing a lot for those less fortunate. He has currently rebuilt many railways, which were in ruins. He also provides us with a lot of mobile phones at a cheap price, which can help many people with out the money. The quote can be argued both for and against. People who have plenty of money often spend it frivolously, even though there are millions of people worldwide dying of hunger. I believe that if all people with plenty of money gave donations such as Bill Gates did then perhaps this problem of poverty could be resolved. Many people say, "What is the point of rich people?" and so many people would argue for the quote, saying that there shouldn't be rich people as long as there is poverty in the world. However this could be argued against because if it wasn't for the rich people that are around to this very day, then perhaps some of the poverty problems would not have been resolved in the way that they have. If those who are rich believed in either Christianity or Islam then we know that poor countries could be helped a great deal, as they would then see giving to the less fortunate a necessity. Overall I believe that without the rich there would be no solutions to poverty, and so I disagree with the quote. In order for poverty to be solved we need to convince those with plenty of money to give to charities all around the world. Therefore if we could manage this then perhaps poverty could be completely stopped worldwide. SARAH JANES 11CS WEALTH AND POVERTY COURSEWORK ...read more.